In Defense of Weddings

Recently, I happened across an article bemoaning the high cost of weddings. In general, I think that critics of expensive weddings make some good points — the median cost of a wedding in America is $17,500, people could use that money for other things, the wedding-industrial complex has lots of arbitrary "musts" designed to fleece consumers, we don't need no piece of paper from the city hall, etc. I certainly understand the appeal of eloping and then spending nearly 20k on a fabulous trip (that $ wouldn't buy you a garden shed in my city, so I won't say "or house").

Yet, I will speak in defense of spending serious money on a wedding.*

I think that the sort of article that bemoans Americans' supposed stupidity for spending money on weddings or other celebrations — christenings, quinceañeras, graduations — often misses something important about living in communities. Sure, if we never threw birthday parties, we would have larger savings accounts, but that is a fairly cold measure of achievement. I think that assuming that the only thing that motivates people to spend money on celebrations is a self-centered love of conspicuous consumption overlooks how people create and sustain social bonds. A wedding isn't just a chance to show off — it's a chance to bring people you love together and to give them a opportunity to enjoy one another. For many people, marking the milestones of their lives with some amount of revelry is worth stretching their financial resources. It's not that they don't understand the magic of compound interest — they are making different (and reasonable) choices.

We did not have a fancy wedding — we got married in the little church up the street from my aunt's house and had the reception in her back yard. I bought most of my flowers at Stop & Shop and cut many of the rest in my mom's and aunts' gardens. Another aunt made the invitations. I bought my dress for $110 off the rack at Macy's. The bridesmaids' dresses were $100 each at the mall. We played music off of Pete's iPod over a sound system borrowed from my uncle.
So where did all that money go?

We spent money on the things that would make the day great for our 150+ guests. We wanted to give our families and friends one wonderful day of enjoying one another and I think we succeeded in that.

About $1,000 went to cake. Rather than get an elaborate wedding cake, we bought about 30 cakes from our favorite bakery (Pastiche in Providence, RI) and had a cake buffet. Rather than choose one or two flavors, we ordered a bit of everything: cheesecake, carrot cake, lemon chiffon, chocolate, fruit tart, chocolate-raspberry torte, etc.: 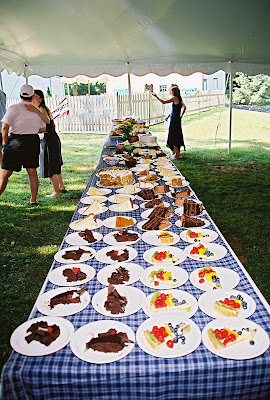 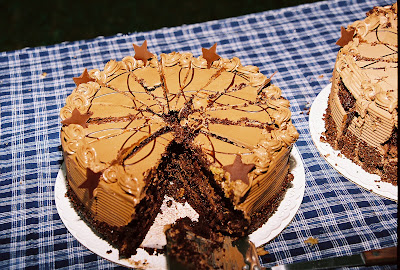 Another $1,000 went to drinks: beer, wine, soda, water, and coffee. Three kegs of Sam Adams (Boston lager, stout, and summer ale) took up a chunk of that, as did 2 or three cases of wine. There's a local soda maker up the street from my parents' house, so we got a dozen different flavors of soda in glass bottles. We filled some big tubs with ice and put pitchers on a table and people helped themselves.

About $3,000 went to food. My mother and aunts made vats of pasta salad and potato salad, piles of cookies, and vast fruit plates. The bulk of this money went to a friend-of-a-friend who is a BBQ competition champ — we hired him to bring his setup and make pulled pork, spare ribs, bbq chicken, and grilled vegetables: 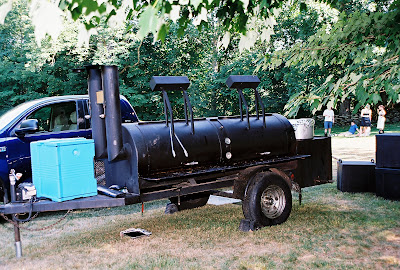 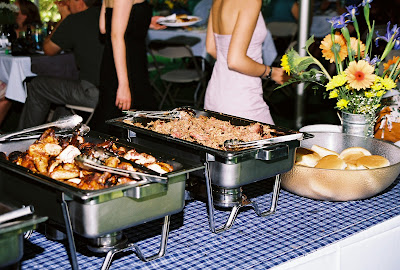 An additional $1,500 went to two large canopies. It turned out to be a spectacular day, weather-wise, but you can never tell in New England. If it had been drizzly, we would have been very thankful that we had those tents, so I can't regret the money we spent on them.

About $2,000 went to the photographer. It was a big expense, but we treasure the pictures we have from that day. We had her take family portraits of all of the nuclear families and extended families, with everyone looking their best and all together in the same place. We gave those pictures as Christmas presents and everyone has them framed in their houses now.
There were other expenses here and there that made up the last little bit — church fees, gifts for the bridesmaids and groomsmen (we gave them the shirts/ties and necklaces they wore for the ceremony), a few hundred dollars on flowers, etc. In general, we didn't spend much on anything that wasn't directly related to making this a good party. I've been to plenty of un-fun weddings where I have eaten overcooked chicken and cardboard cake while attempting to avoid the dance floor, and I didn't think my family would have appreciated enduring that on my behalf. Instead, we blew 10 grand on the best barbecue ever and it was awesome. 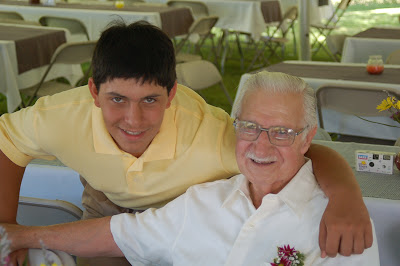 Perhaps I remember my wedding with affection because my beloved grandfather had a devastating stroke a few weeks later, so it was the last time we were really all together as a family. When I look back at the pictures, I see my mom talking to my mother-in-law's friends and my grandmothers eating lunch together while my high school friends play badminton with Pete's cousins and the younger kids splash in the pool. Both of our families are musically inclined and many people brought instruments, leading to an hours-long cross-family, friend-inclusive jam session. Everyone got to chat with everyone else and enjoy free beer and good food. 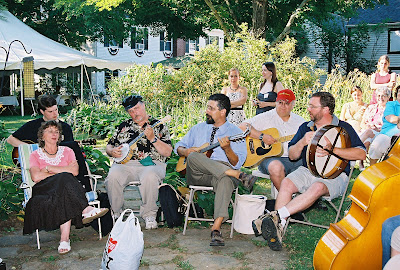 So, I suppose it's true that if we had eloped and saved that $10,000, we could have invested it and spent it on Snapdragon's college education in 18 years. But we wouldn't have had that day, and we would have been the poorer for it.
*I should note that we were married in Connecticut and live in Massachusetts, so marriage is an option available to all of our neighbors.
Posted by Caitlin GD Hopkins at 8:40 AM

that is exactly how weddings should be, what you as a couple want and need. my husband and i were married on a steamboat with just our closest family members and we wouldn't have it any other way...happy anniversary!

Thanks for laying out where the money went-- when it's broken down like that, it sounds like every penny was put to excellent use. As a member of an enormous extended family, it seems like my hypothetical future wedding can either be 1. tiny and cheap or 2. a huge blowout/ family reunion. I have a while to go yet, but you've made a great case for the latter!

As one of the folks lucky enough to have been a part of your wonderful family getogether for your wedding - thanks. And thanks again for bringing back the memories of that day we got to know your family and reconnect with Pete's. We were blessed to have been able to drive your grandmother and grandfather back to their lodgings before the wedding as part of our contribution. We all loved the Pownall/Rathke book - more thanks for that. All our best to you, Pete and Snapdragon, Anita, Steve and Alex