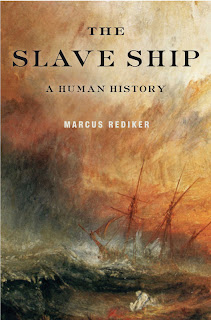 Over the past few weeks, I have been reading Marcus Rediker's The Slave Ship: A Human History in dribs and drabs. Actually, I have been listening to the unabridged version available through Audible, but I say it counts.

I've been dancing around this book for a while because I'm not entirely sure what I think of it. On one hand, it has been enormously useful for me in thinking about death at sea and the role of terror in capitalist production. On the other, I am slightly uncomfortable with the porn-y aspect of Rediker's efforts to linger on the violence of the slave ships. I suppose Rediker would say that my discomfort is a good thing — he laments the "violence of abstraction" that characterizes much of the literature on slavery.

Yet, I think that the way in which he recovers the horrific violence of the slave ship is in some measures sensationalist and lurid. Since Rediker relies heavily on ship's manifests, court documents, and the testimony of sailors, his descriptions of violence are episodic and include detailed descriptions of torture and suffering, but few opportunities for readers to become attached to particular victims. Such is the nature of the sources —Africans flash in and out of the book as writhing, wretched, ruined bodies, as if they were illuminated by lightning strikes. We gape in horror at their anguish, but we do not know them. This structure supports Rediker's main thesis — that violence/terror is intrinsic to capitalist production and that the slave ship is the heart of that process laid bare — but it does its own kind of violence. Rediker's crazy quilt of horrors skirts the line between educational and lecherous.
Posted by Caitlin GD Hopkins at 11:23 AM

Thanks for sharing your thoughts on this. I am going to check it out.