Gravestone of the Day: Charles Stewart

In Memory of
CHARLES STEWART,
the earliest Occupant
of this Mansion of the
Dead, a Native of Scotland,
& 1st Lieut. Comm. of his
B.M. 74th Regt. of foot,
or Argyle Highlanders,
who died in this Town, while
it was in possession
of the Enemy,
March A.D. 1783,
and was interred beneath
this Stone, AEt. about 40 y's.
Charles Stewart, a British officer, is buried in Castine, Maine. In 1779, he was part of the British garrison that helped fight off the infamous Penobscot Expedition — not that it needed much fighting off. The leaders of the expedition — Commodore Dudley Saltonstall and Paul Revere — waged such an ineffective campaign to drive the British out of Maine that Saltonstall had to stand trial before a court-martial and Revere was dismissed from military service. The Americans more or less sailed to Castine, made a few feeble attempts at a ground assault, and then waited around in the harbor until the British navy arrived in such force that they were forced to scuttle their own ships and walk back to Boston.

Despite the fact that Charles Stewart was on the winning side of one of America's worst naval defeats, someone in Castine has chosen to honor him by placing an American flag at his gravesite. I do not know why. I am also slightly skeptical that Stewart was actually the first person buried in this particular graveyard, seeing as I found a marker bearing the date 1782 not 20 yards away: 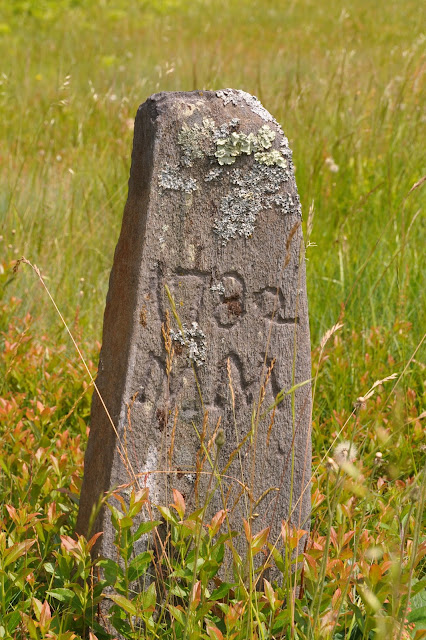 The people putting the US flag on the gravestone probably have no idea about what happened at Penobscot to begin with. Most don't. They probably thought he was some kind of Rev. War veteran, which... I suppose he was.