Canada Wait is the great(x8)-grandmother of Sarah Palin. She was born in captivity in Canada. 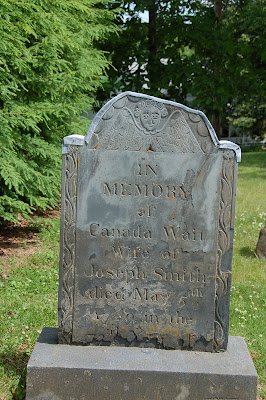 Canada's mother, Martha, and her three sisters, Mary (6), Martha (4), and Sarah (2), were captured during a raid on Hadley, MA on September 19, 1677. In all, 21 captives were taken from Hadley and marched to Canada. Martha Wait survived the journey and gave birth to Canada on January 22, 1678. Another captive, Hannah Jennings, gave birth to a little boy on March 14, 1678 and named him Captivity.

The captives were redeemed in the spring of 1678, thanks to the efforts of the babies' fathers, Benjamin Wait and Stephen Jennings, and a Mohawk guide whose name is not preserved in the English records.

Both Canada and Captivity went on to live long, full lives. Canada married Joseph Smith, whose father had been killed in a raid in 1676. They had ten children: Mary, Joseph, Martha, Benjamin, John, Sarah, Esther, Hannah, Eleanor, Joseph, and Samuel. Sarah Palin is a descendant of Canada's first daughter, Mary (b. 1697).

Do you know if anyone in recent times has tried to re-walk the route taken by the various New England captives who were "carried to Canada"? I think it's generally known, though I've never seen a map. Depending on where they began, they probably made their way to the Connecticut River and up to perhaps White River Junction, and then west over the Green Mountains perhaps joining the trail that ran along Otter Creek and led to Champlain -- then "down" the lake by canoe to the St. Lawrence and then a little west to Akwesasne.

I think this would make a fascinating trip and/or documentary.

(Here's one mention of the route.)

I'd certainly watch that documentary.

This source mentions an alternate route taken by Benjamin Wait and Stephen Jennings on their ransom mission: Hadley to Albany to Schenectady, down Lake George by canoe to Lake Champlain.

I was just reading a recent Harvard dissertation about Indian/English landscapes in 17th-c. New England that argued that Indians dominated the interior pathways until very late in the century (Europeans preferred water travel). It would be interesting to compare the French/Indian routes to the English voyages to Montreal.

Wow, I just read the account you linked above -- what a film that would make.