One thing about carving something in stone — it's really tough to erase mistakes. 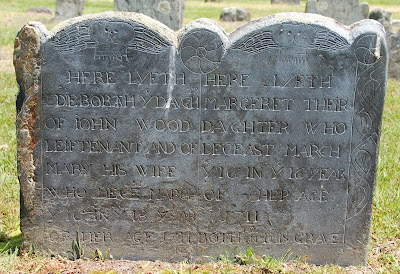 The Wood family of Little Compton, RI suffered a tragedy in 1712: all four of their teenage children died between March 8 and March 16. There are several other gravestones in the immediate area dated January-March 1712, which indicates a major epidemic. I haven't been able to find out exactly what the epidemic was — it was unusual in its virulence among teenagers and young adults.

Two of the Wood children, Deborah (age 18) and Margeret (age 16), are buried under the same headstone. It is a lovely example of an early John Stevens I double stone with strong letters, dotted capital Is, and muffin-shaped deaths heads.

If you look closely, you can see that Stevens originally misidentified Deborah as "Elizabeth" — you can see the initial E, the I, and a faint ghost of the Z. Stevens reused the H at the end and sort of gave up on trying to erase the T. 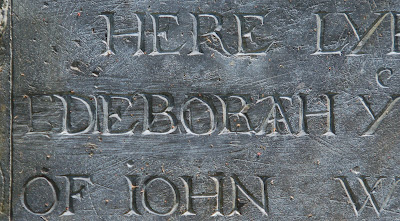 If there was a widespread epidemic, Stevens may have been inundated with orders. Perhaps he mixed them up.
Posted by Caitlin GD Hopkins at 7:08 AM