When I first found Lavinia Meekins in the census, I thought that her family might be unique. After all, how many black Southerners had children named after Confederate heroes?

Actually, quite a few. 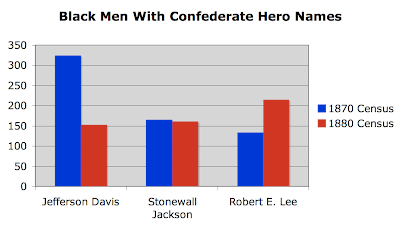 One interesting thing about this chart is the tremendous drop in the name "Jefferson Davis" between 1870 and 1880. It seems unlikely that more than half of the black children named Jeff Davis died in the intervening decade, especially since most of them were older than 5 in 1870, so they had a better chance of survival than infants. Did many of the boys named Jeff Davis decide to go by another name when they reached the age of 15 or 16?

Unfortunately, it is difficult to track any Southerner from census to census. I count 166 black Stonewalls in 1870 and 161 in 1880, but there is very little overlap between the two lists. This makes it difficult to generalize about the rising or falling popularity of a name over time. In my next post, I'll try to tackle this problem.

These three names seem to be the most popular, but a few others crop up from time to time. The 1870 census shows handfuls of black Southerners named Pickett, Longstreet, Wade Hampton, General Forrest, Zollicoffer, and Braxton Bragg. I haven't run the numbers on "Forrest" and "Beauregard," but, in initial searches, both seem to be almost as popular as Stonewall and Lee.

I won't overburden this post with specific examples, but here are a few notable examples of Confederate names given to black children during and after the war: 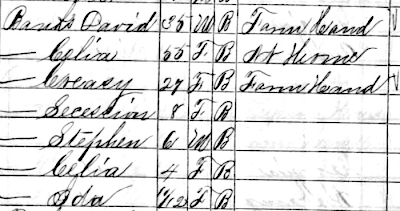 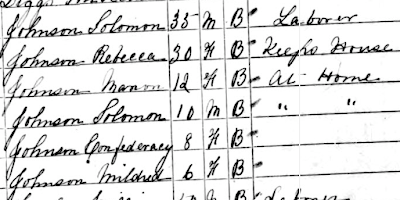 brothers, Zollicoffer Robinson, b. 1862 and General Lee Robinson b. 1864, Lancaster, KY (not included in statistics) 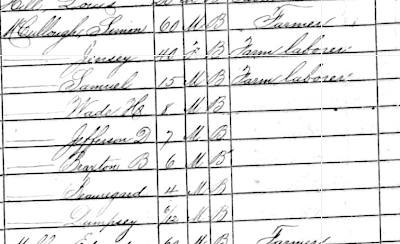 Posted by Caitlin GD Hopkins at 7:38 AM