I love Massachusetts. One day, we're mourning the brave patriots slain by cruel, bloody, British oppressors and the next we're complaining about "the impious hand of Treason & Rebellion." 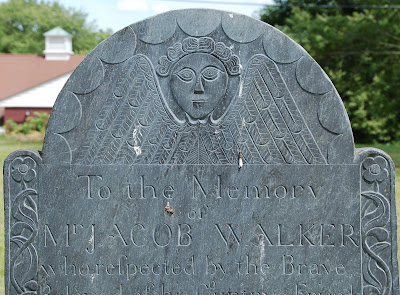 Meet Jacob Walker of Whately, MA. In 1787, Walker responded to a call for volunteer militia to put down Shays' Rebellion, an uprising of debtors in western Massachusetts that is best known for exposing the weaknesses of the federal government under the Articles of Confederation. Walker was killed by Jason Parmenter, a suspected ringleader who resisted efforts to arrest him. 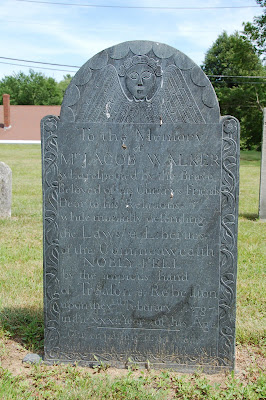 Walker is buried in Hatfield, MA under a headstone that testifies to the malleability of political rhetoric in the Revolutionary era. Compare entry #28 to entry #96:


To the Memory
of
Mr JACOB WALKER
who respected by the Brave,
Beloved of his Country's Friends
Dear to his Relations,
while manfully defending
the Laws & Liberties
of the Commonwealth,
NOBLY FELL
by the impious hand
of Treason & Rebellion,
upon the 17th February AD 1787
in the XXXII Year of his Age.
Citizen passing drop a tear
And dare to imitate the BRAVE.
I am of the opinion that gravestones do not merely reflect the evolving demands of loyalty to the new United States — as public monuments, they helped to create new standards for patriotism. Whoever composed this epitaph was making a political argument and trumpeting it in a public space.

As a work of art, this stone is particularly nice. The carver — the Farber Collection is unsure whether it is John Locke or Solomon Ashley — makes lovely letters, though he could have used a once-over from a better speller. I especially like those capital As.
Posted by Caitlin GD Hopkins at 8:01 AM

> Shays' Rebellion, an uprising of debtors in western Massachusetts that is best known for exposing the weaknesses of the federal government under the Articles of Confederation

Are you referring to the last battle of the American Revolution in which veteran fighters for Independence rose up against moneyed interests who sought to enslave the population? The conflict which foretold the social destructiveness of a massively centralized federal government?