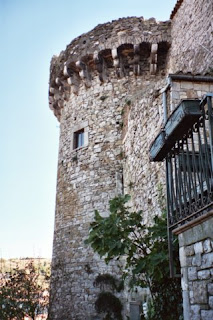 I recently received an email from a couple who had come across some information I posted on Ancestry.com about my family history. They noticed that my paternal grandmother's family is from Celenza Valfortore in Foggia, Italy, and sent me a link to their Celenza Heritage website. I wanted to mention it here because it's always exciting to find referenced to your family history online. They have a whole page on Celenzani in Waterbury, CT, which is where my grandparents live. I sent the link along to my grandma - I hope she contacts them because she loves to tell stories about her family. 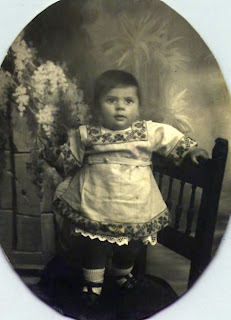 My paternal grandfather was born in Sassinoro in Benevento, near Naples. This is a picture of him when he was a baby. I love his dress! We have other photos of his babyhood, but they involve nudity and artful bunches of grapes, so I'll spare him the indignity. He must have been the most photographed baby in town because his father had gone to America for work and his mother liked to send him pictures.

My grandfather's father was born in Buenos Aires - we have a great photograph of his family from around the turn of the century, but I don't have a copy on my computer. In it, my great-great grandfather is wearing a huge, fur-trimmed cape, a rakishly cocked hat, and a luxuriant mustache. I'm not entirely sure how he ended up in Argentina - family legend says it had something to do with not wanting to serve in the Italian army. I'm also not sure whether having a great grandfather who was born and lived in Argentina makes me technically part Hispanic. I lean on the side of "no" since they were always ethnically Italian. Though, that does raise the question of how long you have to live somewhere in order to claim that ethnicity. When I was a teacher, I had a student whose family was German-Argentine, and the school categorized her as "Hispanic," right alongside the kid whose family spoke Nahuatl at home and (inexplicably) the Portuguese students. My point is that "Hispanic" is a broad and ill-defined category, but one to which I do not feel I belong. 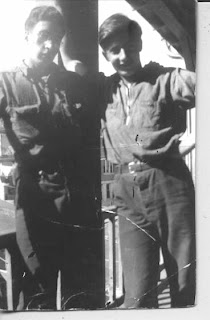 My maternal grandfather is also Italian, though he and all his siblings were born in America. This is one of my favorite pictures of him. My Papa is the smiley one on the right, his older brother is on the left. Papa served in the Air Corps during WWII, serving as the radio operator with the 27th Troop Carrier Squadron in China-Burma-India. He has a hatful of medals, including a Purple Heart and a Distinguished Flying Cross.

My paternal grandfather served too, but he was an officer and never went overseas. He stayed in the US and trained troops (including the 442nd Infantry) and was on a transport in the Pacific Ocean when the US bombed Hiroshima. 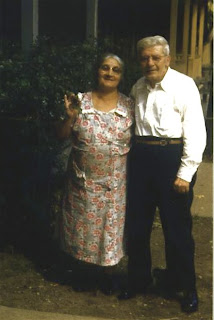 Papa's father was an immigrant and spoke mostly Italian, but his mother came over when she was two and was very proud of her perfect English. My mother is named after her, and I grew up with stories of her. She merits two pictures: the first (with her husband) too adorable to exclude, the second (mocking the baby - my mother - crying in her arms) more representative of her personality. 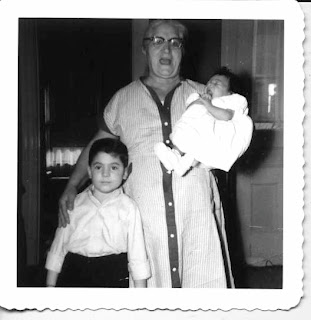 There is some question over my maternal grandmother's ethnicity. Her mother was definitely Irish, but her father (who died before she knew him) is more of a mystery. He definitely spoke French, and was born in Canada, and family legend has him belonging to a French-speaking Micmac community. Good historian that I am, I can't just accept that without further investigation, but I haven't done the necessary research, so I'll throw it out there with my reservations duly noted.

My Naunie and Papa on their wedding day in 1945. Aren't they cute? 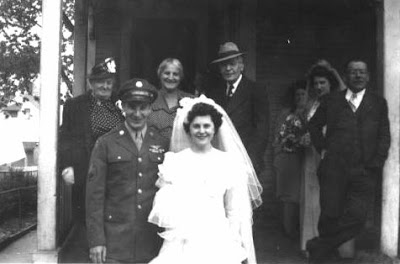 Posted by Caitlin GD Hopkins at 12:47 AM