I should be reading, but instead, I am listening to "Song of America," the musical review of American history produced by Janet Reno. 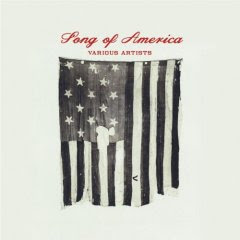 I have mixed feelings about it.

First, there is the question of selection, which other reviewers have covered in depth. In a nutshell, this compilation is highly selective, as any broad compilation must be. Still, the argument of breadth does not excuse the many substantial omissions (unionization? Latinos? Civil Rights Movement? Asian-Americans? The 17th century?).

Second, is the question of definition. Is this a compilation of the history of American music or is a history of America in music? If the former, the interpretive stylings of some of the artists become inexcusable. If the latter, it is hardly comprehensive.

The promotional material for this album touted its usefulness as a teaching tool, and I think that many of the selections would be wonderful for classroom use, but others are too distorted by reinterpretation. Does Harper Simon's breathy, rocked-up "Yankee Doodle" convey an authentic moment? One could argue that they are recapturing some of the song's original risque-ness by presenting it this way, but I'm not that impressed. Why play the "Stars and Stripes Forever" on a mandolin? There aren't enough folksy, acoustic strings on this disk already? One brass band would kill you? I had to look at the credits to find that the song sung by Joana Smith was "The Battle Hymn of the Republic." The casual listener could be forgiven for mistaking it for Ann Margaret's version of "Baby, It's Cold Outside." The version of "John Brown's Body" (featuring kazoo solo) is inching close to the Barron's book that claims that John Brown was himself a slave in terms of travesty.

I don't mean to be a bitch about it - many of the selections are both great listening and updated without being eviscerated. I especially enjoyed "Peg and Awl," "Seven Cent Cotton and Forty Cent Meat," "Rosie the Riveter" (A saxophone! Novel!), and "The Great Atomic Power."

But I probably would not be writing this review at all if the poor, misguided souls who produced this album had not included the bar-none worst song ever crapped out of modern Nashville: "Where Were You When the World Stopped Turning." My hatred for this song once inspired me to write a 20-page paper for a class on war and the media. Unfortunately, the restrained academic voice necessary for writing a research paper did not allow me free rein, so I'll say it now:

THIS SONG IS DISTILLED MUSICAL EVIL.
A CURSE ON ALAN JACKSON!

For those of you fortunate enough to have avoided this steaming pile of sanctimonious, sentimental schlock, some background info is necessary. After deciding that the country had not suffered enough after September 11, 2001, Alan Jackson managed to crystalize an entire nation's ignorance, smugness, narcissism*, and jingoism into a single song. One might consider it something of an accomplishment if it weren't so infuriating.

After imagining the activities of regular Americans as they reacted to the terrorist attacks (weeping, praying, and "go[ing] out and buy you [sic] a gun" among them), Jackson urges us to abandon any attempts to understand what happened. Instead, we should retreat into the egotism of modern feel-good Christianity:

I'm just a singer of simple songs,
I'm not a real political man.
I watch CNN, but I'm not sure I can tell you
The difference in [sic] Iraq and Iran.
But I know Jesus and I talk to God,
And I remember this from when I was young
That Faith, Hope, and Love are good things He gave us
And the greatest is Love.

Yeah, it's probably not important to think about America's place in a world that includes countries that are not America. Offer up some platitudes and "burst out in pride for the red, white, and blue," because that's the kind of deep thinking that will preserve our Constitution and guard against unilateralism in this stressful time.

Even the title is supremely offensive. Does the world stop turning for any tragedy? Even an era-defining tragedy? Why should the world stop turning for America? I don't think it paused for Hiroshima. The genocide in Rwanda was the equivalent of four World Trade Centers falling every single day, day after day for 100 days in a row. Did your world blip for those children?

This song (and its horrifying popularity) is a real blow to my hope that anyone can ever have any historical perspective. Can we even have contemporary perspective? I guess not, and it's probably foolish to hope so. Still, I have to believe that there is value in striving, and that's tough when this song is willful ignorance with tambourines and spangles. It's musical Young Earth Creationism. It could make an atheist believe in Satan.


"I have that exact platitude-a-day calendar at home. It's how I know that beauty comes from within."
- Veronica Mars

*Note: While typing this post, I inadvertently invented a new word: arcissism. I like it and will incorporate it into my regular vocabulary from now on.
Posted by Caitlin GD Hopkins at 3:36 PM