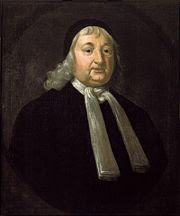 Sewall is probably best known as one of the judges in the Salem Witch Trials. He later regretted his involvement and wrote a statement of remorse that was read aloud to the congregation of the Old South Meetinghouse in Boston in 1697.

I haven't read Eve LaPlante's sympathetic biography of Sewall, but I tend to agree with this reviewer: there is something special about a leader who is willing to admit his mistakes.

Sewall is also remembered for being an early opponent of slavery. His anti-slavery pamphlet, The Selling of Joseph was published in 1700, at a time when many of his neighbors (including Cotton Mather) were slave owners.
Posted by Caitlin GD Hopkins at 1:44 AM