The Geographic Revolution in Early America

This afternoon, I read chapter 3 of Martin Bruckner's The Geographic Revolution in Early America: Maps, Literacy, and National Identity (2006). 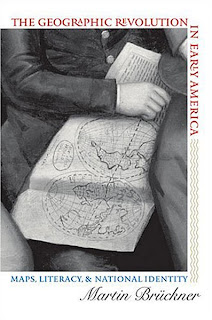 I was primed to enjoy this piece - I am completely on board with the argument that language, maps, and education are key to creating imagined communities. I agree that efforts to exert authority over people are often most effective when they are matters of education and acclimation rather than coercion. Furthermore, I find the subject matter (education, national identity, symbols, etc.) fascinating.

Still, I found this chapter less than satisfying. It's difficult to articulate exactly what bothered me, but I've come up with three criticisms:

Maybe I'm just being picky, but I was annoyed. I was ready to enjoy this assignment, but ended up filling up the margins with questions and corrections. Disappointing.
Posted by Caitlin GD Hopkins at 7:57 PM