After recommending it to a commenter, I thought I should devote some time to Bart D. Ehrman's excellent book, Misquoting Jesus: The Story Behind Who Changed the Bible and Why (2005). 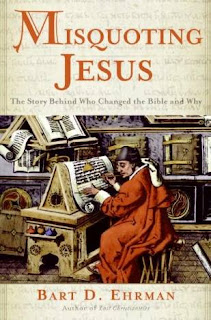 Ehrman is a former fundamentalist Christian who was educated at the Moody Bible Institute and Wheaton College, both conservative Christian schools. Ehrman devoted himself to studying the Bible and textual criticism, but as he learned more about the history of Christian scripture and studied the earliest manuscripts, he began to question his view of the Bible as an inerrant, inspired document. The main thesis of Misquoting Jesus is that the words of the Bible have been changed many times over the centuries, sometimes by accident and sometimes in the service of upholding orthodox interpretations.

Yet, even with our advances in technology and methodology, even with the incomparably greater manuscript resources at our disposal, our Greek texts of today bear an uncanny resemblance to the Greek text of Westcott and Hort. It would not serve my purpose here to enter a detailed discussion of the methodological advances that Westcott and Hort made in establishing the text of the Greek New Testament. The area in which their work was perhaps proved most significant is in the grouping of manuscripts.

One of the best things about this book is its accessibility. Ehrman is explicitly writing for a lay audience, and presents his argument clearly, but without being condescending.

Ehrman's personal story also makes his argument more compelling because it shows how clear the documentary record is. He was a firm believer in Biblical inerrancy, but the more he learned about the Bible, the more he looked into the manuscripts, the more ancient languages he learned, the more tenuous those beliefs became.

When it comes to ancient Christianity, I am just as much a lay reader as anyone else, and so not qualified to challenge Ehrman on any of his specific points. I did have one lingering question, though: Were the authors of the gospels truly creative authors, as Ehrman assumes, or were they compilers of oral tradition, as Dundes argues? The work of textual criticism is concerned with recovering (as much as possible) the original texts as authored by Mark, Matthew, Luke, John, and the authors of the other books of the Bible. But were the people who wrote the Bible really "authors" in the creative sense? Most Christians would probably say no - in Christian tradition, the human writers were merely conduits of the divine word. Alan Dundes would also say no - the folklorist argues that the words codified in scripture were representative of multiple versions that were available in the oral tradition. But Ehrman argues for original human authors who may have felt they were inspired but who were, ultimately, creative. In some cases, this seems reasonable - for example, the Epistles were surely written by creative authors - but in others (accounts of the life of Jesus), Dundes' explanation is more convincing to me.
Posted by Caitlin GD Hopkins at 3:27 PM