I didn't get much reading done yesterday because the universe had it in for me.

My plan for today was to drive home to my parents' house after my 17th century reading group meeting on Friday afternoon,
but it wasn't that easy. When I walked out to my car, I found that it had a large gash down the passenger's side - one that I certainly did not remember from the day before. 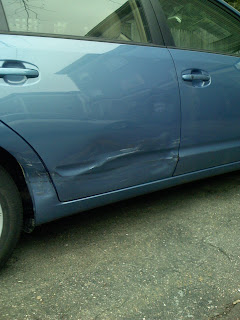 Based on the following evidence, I concluded that the person who parks next to me must have scraped it while pulling out:

1. The scratch was not there yesterday.

2. The scratch runs along the door, tire, hubcap, and back of the wheelwell in a straight line, indicating that the car was 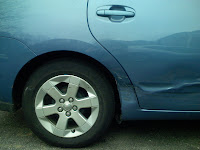 parked in its present position when it was scratched.

3. There was paint between the doors and doorjambs on both the front and back doors. This paint would have come off when
we opened the doors if the scratch were old. 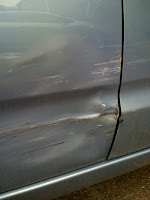 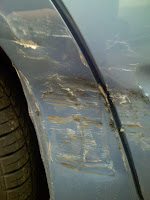 4. The guy who parks next to me drives a small, gray Saab or Volvo that is low to the ground. The scratch is both low and gray.

Complicating factor: the guy who parks next to me is my landlord.

He was not home, so I couldn't ask him what happened, and there was no note on my car. I later realized that there might be a note in my mailbox, but I was already on the road home when that thought crossed my mind. I didn't want to wait until he came home because I was anxious to get to my parents' before it started raining/getting dark, and I also didn't want to destroy the wheel alignment and paint shavings.

So, I called the police and filed a report. A police officer came over to the house, checked out the damage, called it in, and gave me a file number. He also said he would swing by later and see if there was damage on the other guy's car.

Then, I called my insurance company and filed a claim there. Unless I can prove that someone else scraped the car and that it wasn't my fault, we have a $2,000 deductible for repairs. Unless my landlord tells me he did it, I don't know how I would prove that he did. It also could have been someone else (though I have never seen anyone else park in the spot next to ours).

I kind of felt like I was overreacting, but I didn't know what else to do. I'm not angry or anything - I just wanted everything to be properly documented.

Eventually, I got on the road - at 5:30, rather than my planned departure time of 3:30. After lots of traffic, I was within 15 miles of home when I came up behind a giant head-on collision that was blocking both lanes of the only road that goes to my parents' house (it was raining and dark by this time). So, I backtracked to my aunt and uncle's house (the accident was about 2 miles from their house) and hung out there for an hour or so. They weren't home, but I used their phone to call home. I finally got home around 8.

So it was an adventure-filled day, but not very reading-friendly.
Posted by Caitlin GD Hopkins at 11:11 AM