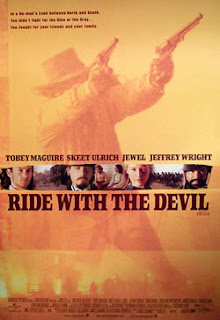 I had to watch this clunker for my Civil War class. It was long, boring, and had horrible dialogue. Tobey Maguire was particularly bad. And that's all I have to say about that.

Except that I can't let it go when someone is wrong on the internet.
I noticed something on the IMDb entry for Ride with the Devil that I can't let slide. There is an entry under "goofs" that notes the pockets on Jewel's "skirt":

Anachronisms: Civil-war era skirts did not have even one in-seam pocket, let alone two. Fancy Chatelaines were used to hold purses and other items by the wealthier women, and the poorer classes made do with cloth pockets suspended from a strap that was pinned to the waistband. Flat surface pockets came in after the closing of the civil war.

I'm something of a costume Nazi myself, and it is my opinion that those pockets were on Jewel's apron, not her skirt. Apron pockets are perfectly appropriate for the Civil War era. This only bothered me because the poster on IMDb went on about chatelaines, implying some knowledge. And he/she failed to mention the fairly egregious necklines.

Besides, costume details are the least goofy of the goofs. I think the pistol battle at 100 yards in the opening half hour was probably more unlikely.

And that really is all.
Posted by Caitlin GD Hopkins at 9:28 PM