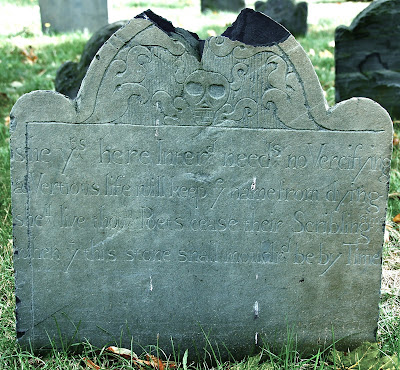 On Saturday's outing to Bell Rock Cemetery in Malden, Pete found this extraordinary stone. I had completely overlooked it. At Bell Rock, nearly all of the stones face South, so I had previously passed over this humble, North-facing stone, which has never been illuminated during one of my visits.

There is so much to say about this gravestone. 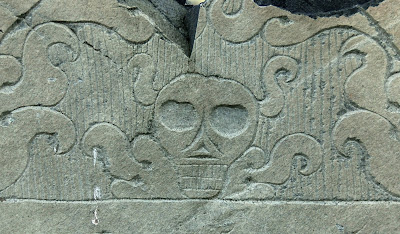 For starters, the iconography is startling. A central death's head is surrounded by . . . flames? smoke? Other gravestones are decorated with vines and foliage, but these swirls look fire-like to me. Two of the plumes are arranged on either side of the skull so that they look like horns. When I first saw this, I was hesitant to call them horns, but I must take my own advice — I see horns. I'm not sure what this means, but I don't think that "horned skull surrounded by flames" is a warm, fuzzy symbol in any context.

Next, the epitaph is noteworthy:


No name, no dates. Just a verse rejecting the power of "Vercifying" and gravestones. Stones from this time sometimes imply that they (and the remains beneath them) will endure until the judgment day — rarely do they acknowledge that the stones, while comparatively durable, will not last forever. It's a poignant sentiment 300 years on.

Who was this woman? Why did the carver reject the conventions of grave markers so thoroughly? Does this stone help explain why New England has only a handful of stones from before the 1670s? Was there an early aversion to marking the dead with vain, worldly objects?

It is very difficult to date a stone like this. The death's head is somewhat unusual in that it has no eyebrows, but that's hardly a unique marker. I've compared this stone to others in the Farber Collection on several points:
The closest I've found to a match is the Josiah Thacher stone (1702) from Yarmouth, MA: 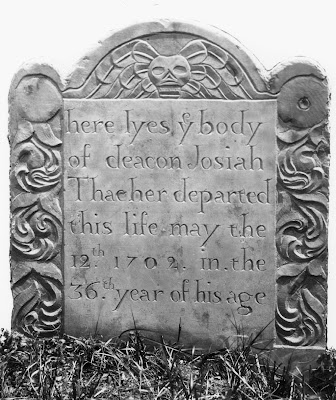 The quality of the lettering is very similar, with curly little hats on the l, h, d, etc., a curly bottom on the t, and an inappropriate lower-case for the first letter. I'd be willing to guess that these stones were lettered by the same hand. Unfortunately, Farber does not attach a name to that hand. Still, it allows me to put a provisional date of 1692-1712 on the mystery stone.

If pressed, I would guess that the mystery stone was producd before the Josiah Tacher stone. The lettering has delicate details, but is poorly spaced and lightly inscribed. More glaringly, the layout is bizarre — an unruled runs around 3 sides of the stone, but tapers off and does not enclose the right side. No matter — letters begin before the line on the left and are crammed in on the right. Which came first, the line or the letters? Conflicting evidence: look at the spacing of "she" vs. the spacing of "she'll." Also, contractions?

The whole thing is a confusing mix of the amateur and the skillful. Those letters weren't gouged out with a nail, but whoever carved them was not in the habit of using a ruler for his borders. He wasn't even sure he wanted borders at all.

I need to think more about this stone.


She that's here interred needs no versifying,
A virtuous life will keep the name from dying.
She'll live, though poets cease their scribbling rhyme,
When that this stone shall mouldred be by Time.

Could it be a footstone that's lost its headstone? Or a recycled trial piece (that's what the mismatch between the letters and the borderlines suggests to me). See if there's a stump 5-6' in either direction, or if it's out of alignment with the surrounding stones.

That verse strikes me as maybe literary in origin. A quick search turns up only one other example, though, from Newton.

Tomorrow, I will post a description of another stone by this carver that looks even more headston-like than this one.

That verse from Newton (1709) is a good clue for dating this stone.

Could the "flames" be clouds? I concede that they look more like flames, but if we take it to be an experimental piece then who knows.

I can believe that the Prentice headstone is 1709, but the footstone looks to be a few decades later. Perhaps the original footstone was replaced? And the 1798 document was copied from an earlier text? I have some trouble imagining that anything carved in slate could have been effaced enough to require replacement in a span of 30 years.

Yes, I suppose that they could be clouds. They just looked so . . . pointy.