Many of Boston's revolutionary-era Whigs —John Hancock, Sam Adams, John Adams — are household names today. Others, like Joseph Warren and James Otis, Jr., are not national heroes, but are still well-known. Then, there is a third tier of patriots who were famous in the 1760s, but are largely forgotten by non-specialists today: William Molineux, Ebenezer Macintosh, etc. 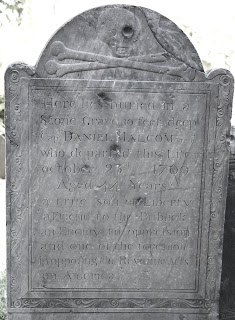 One of those who has seen his fame diminish over time is Captain Daniel Malcom/Malcolm. In the 1760s, Malcolm was known as a rabble-rousing merchant who repeatedly defied customs officials.

In September of 1766, two officials, William Sheafe and Benjamin Hallowell, got an anonymous tip that Malcom had several casks of smuggled alcohol hidden in his cellar in Boston's North End. When Sheafe and Hallowell arrived to search the premises and confiscate the liquor, Malcom refused to unlock the cellar, saying that "if any Man attempted it, he would blow his Brains out." The customs officials retreated. When they came back with a search warrant, their access was blocked by several hundred of Malcom's closest friends. Read a more complete account of the incident here.

Two years later, Capt. Malcom was a major player in the Liberty affair. Comptroller Hallowell testified that Malcom was among the leaders of the mob that interfered with the seizure of the Liberty: 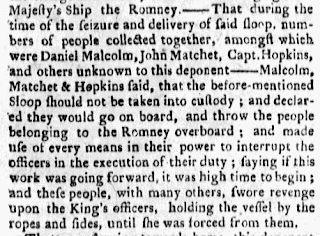 All this is just a longwinded way of saying that "Daniel Malcom" would have been a familiar name to the average resident of Boston c. 1768.

Today, those who remember Daniel Malcom do so because of his extraordinary gravestone and the memorial plaque that hangs in the Old North Church. Both bear variations of the same epitaph. His gravestone in Copp's Hill reads,


Here lies buried in a
Stone Grave 10 feet deep
Capt. DANIEL MALCOM Mercht.
who departed this Life
october 23d 1769
Aged 44 years.
a true son of Liberty
a Friend to the Publick
an Enemy to oppression
and one of the foremost
in opposing the Revenue Acts
on America


AN ENEMY TO OPPRESSION
In Memory of
Capt. DANIEL MALCOM
A merchant of Fleet Street
and Junior Warden of this Church
A fearless opponent of the Revenue Acts
and leader of the Patriots
Who in 1768 opposed
Seizure of Hancock's sloop LIBERTY
by the frigate ROMNEY
He died October 23d 1769 and was
Buried ten feet deep in COPP'S HILL
Safe from British Bullets 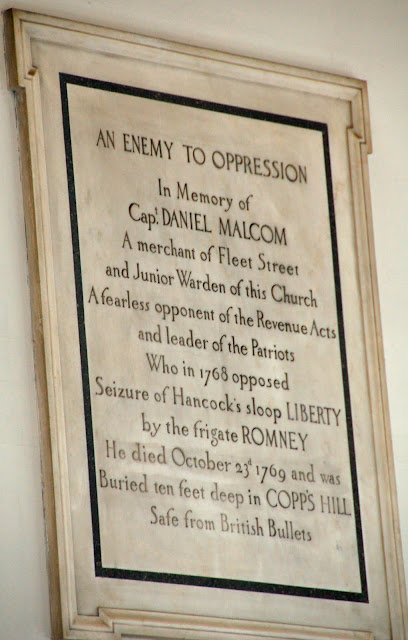 Like the gravestones of civilians exiled during the British occupation of Boston, Malcom's gravestone was a public monument that promoted solidarity among the Whig-leaning Americans. I imagine that it must have annoyed any British soldier or customs official who saw it. I wonder how Capt. Malcom's brother, the notorious loyalist John Malcom, felt about it.

A final note:
It's often difficult to be sure how much time elapsed between death and the erection of a gravestone. While I'm not sure when the memorial plaque went up, the gravestone is fairly easy to date. A copy of the epitaph appeared in the Essex Gazette in the third week of November, 1769: Posted by Caitlin GD Hopkins at 6:59 AM