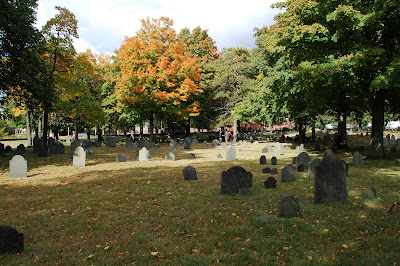 Yesterday, I led an excursion to Bell Rock Cemetery in Malden, MA. Several of my friends had expressed interest in visiting a graveyard with me and I figured that Bell Rock, with its high concentration of pre-1750 stones and its accessibility, would be a good choice. Unlike some of the other big 17th-century cemeteries (Granary, Copp's Hill, Phipp's Street), which are very closely groomed and well documented, Bell Rock feels a bit mysterious — a flea market rather than an auction.

I devised a scavenger hunt that would get everyone looking closely at the iconography and epitaphs. They tried to find,

One of the best things about visiting a graveyard with a group of enthusiastic friends is that fresh eyes see new things. More on that later . . .

*We managed to find two crosses (out of about 400 stones), both on 19th-century stones. No cross-shaped stones, though.
Posted by Caitlin GD Hopkins at 7:29 AM

Wow, wish I were closer! That sounds like a fun trip!