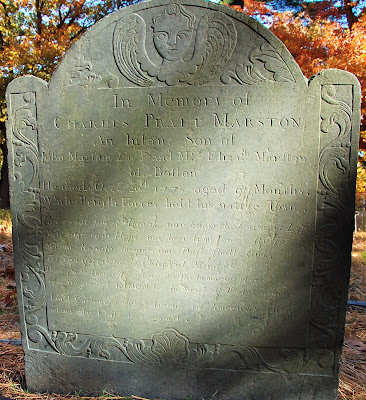 In my recent post about the Daniel Malcom gravestone, I argued that I could conclusively date the stone to the autumn of 1769 based on a description that appeared in the Essex Gazette in November of that year. The implication was that other stones bearing pro-Whig sentiments may also have been erected shortly after the honorees' deaths. If so, stones dedicated to people who died in 1775 would have stood as public monuments throughout the war years.

I have since discovered a gravestone that might challenge this dating: the Charles Pratt Marston stone in Burlington.

Young Charlie was only nine months old when he died in 1775, but his epitaph imagines him as a participant in international politics:

An Infant Son of

Til re:united to thy blissful Mind;

Then shalt thou rise; where dwells Immortal Love

And with great CAMDEN live in brightest Realms above.

Lord Camden a great friend to America & after

whom the Child was nam'd.

First of all, how much do I love an epitaph that comes with its own footnote? We covered annotation with the undergrads in class recently, so I was tickled to see this note. Just in case the reader didn't follow the debates over the Stamp Act in Parliament too closely, this public monument will instruct him/her in identifying America's friends.

The major problem is the reference to Charles Pratt (Lord Camden) in the verse. It is a bit ambiguous, but I tend to think that it implies that Camden was already dead when this epitaph was composed. Yet, Camden did not die until 1794.

So, either this stone was carved after 1794 (nearly 20 years after the baby's death), or the verse does not mean that Lord Camden is deceased. I suppose that you could read it as saying that both Lord Camden and his namesake will go to heaven after the Judgment, in which case, Camden need not be dead yet.

An analysis of the carving style supports an earlier date (c. 1775). The Farber Collection identifies this stone as the work of Henry Christian Geyer, a prolific carver best known for the Susanna Jayne stone in Marblehead (1776). Farber has 134 pictures of stones carved by Henry Christian Geyer, but only a few are for stones dated after 1780 — the latest is 1785 and Geyer died in 1790. Furthermore, many of the elements found on the Charles Pratt Marston stone are visible on other stones with mid-1770s dates:
On the other hand, Henry Christian Geyer had a son, John Just Geyer, who carved plenty of gravestones in the 1780s and 1790s. I tend to think that the Marston stone looks more like Henry's work than like John's, but maybe that's just because I want the stone to be earlier rather than later.

What do you think? Was the Charles Pratt Marston stone have been carved in 1775? Or is it a post-1794 creation? Opinions on this matter are much appreciated.
Posted by Caitlin GD Hopkins at 7:46 AM

That's really tough. I'd have to sit at a table with printouts of as many Geyer stones as you could get from the 1770s and compare them to the 1790s. A quick look in Farber suggests the style is very consistent over this period; you'd have to look carefully at a lot to find a pattern (and a tiny computer screen just doesn't work for this purpose). Features to note might be the large hook on the upper arm of the C; the curled-under small r; maybe the shape of the 7.

But this is a pretty polished and consistent style; it would take effort to work out its chronology in detail.

Yeah, it's a tough call and I'll have to spend some time with it. My dilemma is not helped by the fact that it would be better for my argument if it were 1775, so I have to be super sure in order to guard against bias!

I think it really boils down to whether I think it's a Henry Geyer stone or if there is a possibility that it could be John Geyer. If I decide that it is Henry, then it can't possibly be post-1794 (he died in 1790). If that's true, then the verse can't really be saying that Camden is dead. Since the evidence from the verse is the only thing leading me to doubt the 1770s dating in the first place, a definitive carver ID will solve my biggest problem.

Of course, if it is Henry rather than John, I can only definitively say that it is pre-1791, not that it is definitively 1775. But that's not such a big problem. I may never be able to say for certain when it was carved, but if there is a possibility that it is from 1775, that's better than ruling it out totally.

I'm pretty sure this stone is too early for the 1790s. Although John Just Geyer might have imitated his father early on, by the 1790s he had given up rounded shoulders, elaborate borders and the largish triangle in the crossbar of the "t."