A while back, I highlighted the epitaphs carved by Obadiah Wheeler in which he identifies men as husbands to their wives.

This example from Plymouth, MA is not quite the same thing, but it is similar: William Atwood is identified as the "Consort of Temperance Atwood." 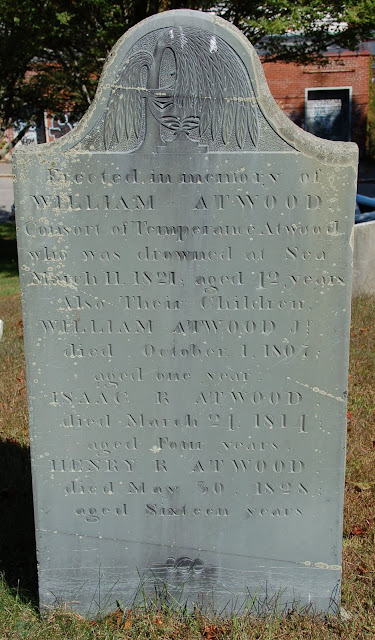 Since it is so rare to see an adult, white man identified in terms of his relationship with another person, I wonder whether this may say something about the position of women in maritime communities. Historians have long recognized that port towns tend to have a disproportionate number of female-headed households due to the long and frequent absences of male mariners. Is it possible that whoever commissioned this epitaph was accustomed to treating Temperance Atwood as the head of the Atwood household?

Also, I would name a hypothetical child "Temperance" if Pete would let me. It's a good twin name for "Patience."
Posted by Caitlin GD Hopkins at 6:57 AM

Since it records four deaths ranging from 1807 to 1828, this is certainly a composite stone that replaced two or more preexisting stones, and since it's a father and his sons, that may explain the wording. Mother+children stones are not uncommon, but how common are father+children stones? Is it the case that "family" stones of this kind always identify the relationships, regardless of the sex of the individuals involved?

I've been finding a bunch of father-child stones in Plymouth and other maritime communities. Usually, the father dies at sea and the stone goes up years later after one or more of the children have died.

I'm trying to put together a comprehensive database of Plymouth gravestones/cenotaphs that are dedicated to men who died at sea or in the West Indies. After that, I'll be able to say exactly how common the father-child stone is.

These maritime stones often identify young men as the sons of their parents or the fathers of their children, but this is the only one I've found in Plymouth that calls a man the husband/consort/relict of his wife.