I went home for a few days this week to attend my youngest brother's high school graduation (congrats, Wheeler!). While there, I stopped in at town hall to see if the town had any records relating to the Windham Center burying ground. It took a little while to find exactly what I was looking for, but I was not disappointed.

Windham, Connecticut was formally incorporated in 1692, but the oldest record I found in the town clerk's vault was a proposal for establishing a plantation on land "bequeathed . . . by Joshua Sachem sonne of Uncas," dated February 17, 1682.

The town has done a pretty good job of conserving its records. The 17th- and 18th-century vital records and town meeting minutes are enclosed in plastic sheets and bound into sturdy, red leather volumes. The bindings are a bit too tight, so the records don't lie flat when the pages are turned, but the plastic sheets are thick and hardy, so I don't think there's too much danger to the original records.

I found some good information about the burying ground, which was officially established in 1707. I haven't read through all of the 18th-century town meeting minutes yet, but I can always go back next time I'm in town.

While I was there, I also peeked at the vital records books. Page 173 of the ledger records the births, deaths, and marriages of some of Windham's enslaved residents (Job Hale, his wife Blosom, their children, Patience and Phineas; Hager and her daughter Dinah; Jenne and her daughter, Tamer): 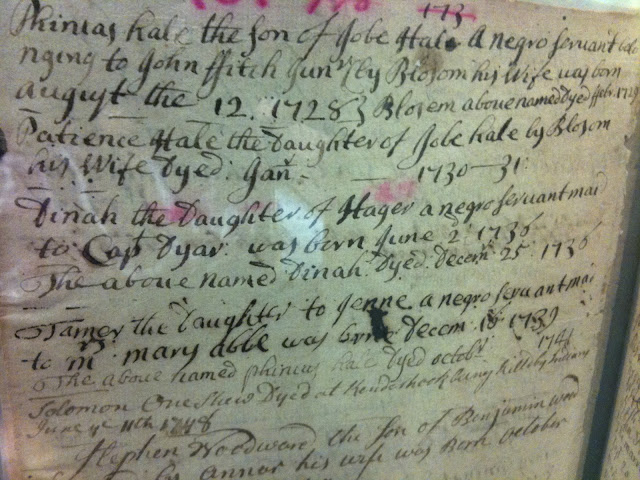 In the 1850s, someone went through the old ledgers and compiled an alphabetical index for all of the vital records. This index became part of the Barbour Collection at the Connecticut State Library, but has not been digitized.

I've been forming a plan to see if I can get some Windham High students to work on a digitization project if I can wrangle some deal with the school to give them credit. It isn't hard work — the handwriting in the 19th-century index is beautiful and clear, so they wouldn't have to deal with the original records directly (though not all of the info from the originals made it into the index — for example, Jobe Hale and his family are listed, but their designation as "negro servants" is not). Then, we could scan the originals and make them accessible online. These records are not central to my dissertation in a way that would allow me to devote 6 months to working on them, but I could certainly direct the production of an online archive.
Posted by Caitlin GD Hopkins at 5:29 PM

If you can't get the High School to give credit you could try recruiting a couple seniors to work on it as their newly mandatory Senior Service Project.

Good idea! I'll have to look into that.