The American Way of Death Revisited 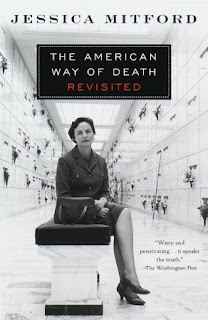 I have been reading Jessica Mitford's The American Way of Death Revisited, which is an amusing investigation of the American funeral industry. It was originally published in 1963 and underwent a minor revision/updating in 1995.

Mitford's main point is that 20th-century American funeral homes and cemeteries are run by often unscrupulous businessmen who are always looking for new ways to make Americans pay more for their services. These tactics include insisting upon embalming, upselling grieving families on elaborate caskets, and misrepresenting the laws, religious requirements, and traditions related to the disposal of corpses. She argues that "a new mythology, essential to the twentieth-century American funeral rite, has grown up — or rather has been built up step by step — to justify the peculiar customs surrounding the disposal of the dead" (16). The purpose of this new mythology is to convince families that a "decent" funeral is an expensive funeral, even when the deceased has expressed his or her preference for simplicity and thrift.

In general, I found this to be an entertaining read, though a bit scattered. I'm not sure if the original was smoother, but the revised edition has bits tacked on in strange places that make the organization haphazard. Still, it is an enlightening tour through the American funeral industry that manages to be quite funny in places. Mitford covers everything from the setup of casket showrooms to the embalming process to the tactic of "pre-need" selling of cemetery plots. I particularly enjoyed her chapter on "Fashions in Funerals" and will be recommending it as a reading for the undergraduate course I am currently working on.

In a few places, I was struck by Mitford's tendency to contrast modern corruption with a golden age of funerals past. She looks fondly back to an age of "simplicity to the point of starkness, the plain pine box" that were the "hallmarks of the traditional American funeral until the end of the nineteenth century" and hopes that "the American public is becoming sickened by ever more ornate and costly funerals" (16, 19). I chuckled a bit when I read that because it reminded me so forcefully of Cotton Mather, who decried the "Expence of Funerals, which often proves the Ruine of Family's" way back in 1713. That's not to say that Mitford doesn't have a valid point about the expense of modern funerals, but Americans have been anxious over funerary opulence and its consequences for some time. Mather was chiefly concerned that the mourners use the funeral to reflect on their own mortality, but he also worried about costs.
Posted by Caitlin GD Hopkins at 2:28 PM

Well, I am a book hog! I have tons of books next to my bed that I'll read a little here and then go on to the next and keep doing this over and over.....now I have another I'm going to have to get my hands on! Thanks!

Check out Lisa Takeuchi Cullen's "Remember Me: A Lively Tour of the New American Way of Death" for a good follow-up to Mitford. It's much less in-depth, but examines different funeral practices around the country, including making ashes into wearable jewelry.