HERE LYES BURIED THE BODY
OF LIEVT. MEHUMAN HINSDELL
DECd. MAY ye 9th 1736.
IN THE 63d. YEAR OF HIS
AGE WHO WAS THE FIRST
MALE CHILD BORN IN THIS
PLACE AND WAS TWICE CAPTIVATED
BY THE INDIAN SALVAGES
Math. 5.7. Blessed are the mercifull
for they shall obtain mercy.
In February of 1704, 31-year-old Mehuman Hinsdell (or Hinsdale) lived in Deerfield, MA with his wife, Mary, their 16-month-old son, Samuel, and Mehuman's younger cousin, Josiah Rising. He held a special place in the history of the settlement — as the first white male born in Deerfield, he was a symbol of town's ability to reproduce itself (a fact which would have meant different things to the major players in the region).

On February 29, Samuel was killed in the famous raid, while Mehuman, Mary, and Josiah were captured. Josiah stayed in Canada, converted to Catholicism, married another Deerfield captive, and lived the rest of his life as a Catholic. Mehuman and Mary returned to Massachusetts in 1706 (their son, Ebenezer, was born at sea during their return voyage).

In 1709, Mehuman was captured again while transporting apple trees for planting: 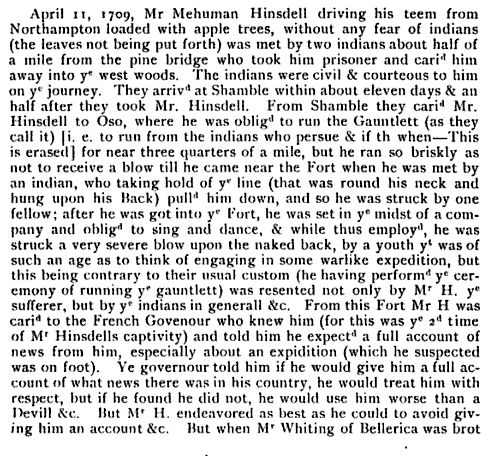 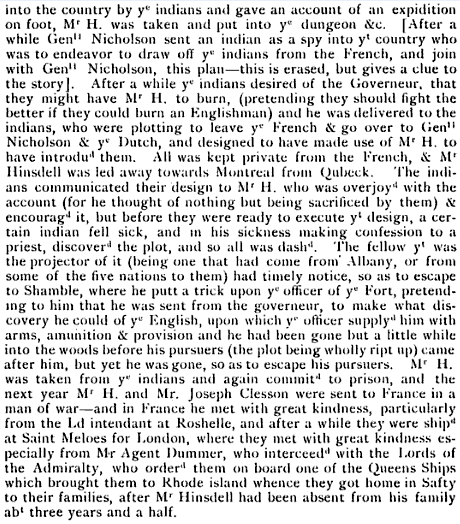 This story provides context for the inscription on Mehuman's gravestone. I have never seen Matthew 5:7 quoted on any other New England gravestone (other excerpts from the Sermon on the Mount are also rare). Who are the merciful in this story? The Englishmen who ransomed Mehuman and Mary? The Indians who rescued him from a French jail? Mehuman himself?

I apologize for the awful photo. I got some new photography equipment for Christmas and am looking forward to using it this summer!
Posted by Caitlin GD Hopkins at 7:17 AM