Apparently, the Republican Governors Association has launched a website called RememberNovember.com. On the site, they have posted a disturbing video that, as far as I can tell, advocates the assassination of President Obama and the bombing of the Capitol, Guy Fawkes-style.

You can watch the video here without actually going to RememberNovember.com.

I know that V for Vendetta was hugely popular, but I don't understand this. The fact that the current Republican-populist movement is trying to wear the mantles of Sam Adams and Guy Fawkes simultaneously makes my head spin. 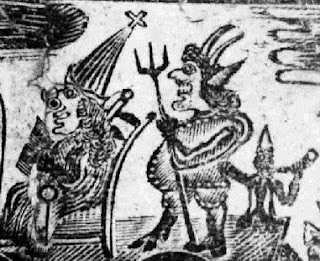 ETA: The more I read about this, the more confused I become. Some commentators are claiming that the video/website has nothing at all to do with Guy Fawkes and that the RGA chose "Remember November" mostly because it rhymes.

While the rhyme and the fact that elections are held in November certainly add depth to this catchy phrase, I think that the Guy Fawkes reference will not be lost on very many people. V for Vendetta was enormously popular in both its comic book and movie forms. Even though the old rhyme, "Remember, remember the 5th of November, gunpowder, treason, and plot" is an anti-Fawkes ditty, most 21st-century Americans know it from the movie, in which V himself repeats the lines as he rings in the 5th of November. It seems clear to me that he is reclaiming the words and "remembering" the 5th of November by reenacting it, i.e. implementing a terrorist plot to kill as many government officials as possible.


The argument that there is no allusion to Fawkes because the video does not mention him by name is downright silly. Between the URL, the pledge on the top of the page (I, xxx, pledge with [x number of people] to remember November), the splashes of black, white, and red in the video, and the fact that the letter V is scrawled in red in the official logo (see below), it is clear that this is supposed to remind people of V. I suppose that not everyone will immediately think of the real Guy Fawkes, but I don't know if you need to go all the way back to the original plot to make this video scary.

I've never heard of V for Vendetta, but had heard of Guy Fawkes, yet I didn't see any correlation when I checked out the page. Googled the comic and found out it was British, probably why I hadn't heard of it.

Yeah, it was made into a big movie a couple of years ago. I didn't see the movie, but I understand that they tweaked the main character, who was an anarchist terrorist in the graphic novel, and made him more of a freedom fighter. It was a pretty big hit and the slogan "Remember November" was big among Ron Paul supporters. "Remember, Remember the 5th of November" is best known as being the first line of the old Guy Fawkes Day rhyme.