"They Fought Their Way to Washington Like Yankee Volunteers" 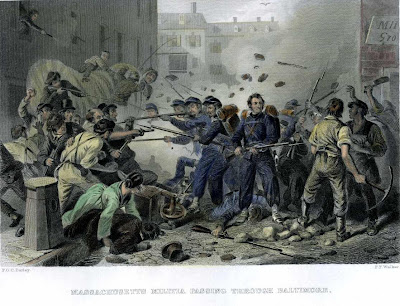 I'm sure that many people will comment on the anniversary of Lexington and Concord today. I will defer to them in that matter and use my space here to point to another event of April 19th: the Baltimore Riot of 1861.

On the 86th anniversary of Lexington and Concord, the 6th Massachusetts Volunteer Infantry arrived in Baltimore, en route to Washington as the first fully equipped regiment to answer Abraham Lincoln's call for troops to put down the rebellion (see James McPherson, Battle Cry of Freedom, pg. 285).*

Since there was no direct rail connection between Boston and Washington, trains that had to make the journey had to switch lines in Baltimore. Usually, the cars were drawn by horses along a special track through the streets, but pro-secession saboteurs pulled up the rails to impede the progress of Union troops, forcing several companies of the 6th Massachusetts to get out and march across the city.

As they marched, the soldiers were assaulted with bricks, clubs, and gunshots by an angry crowd that grew and pressed in against them. Several companies returned fire.

The regiment fought its way through the city, killing 12 civilians and losing 4 men killed and several others wounded in the process. You can read a detailed account from the perspective of the 6th MVI here and book-length treatment here. The soldiers killed in Baltimore are often considered to be the first Union casualties of the Civil War.

The fact that all of this happened on the anniversary of Lexington and Concord escaped no one. In the words of the 6th MVI's regimental historian,

If it had been in the power of the government, for dramatic and patriotic effect, to arrange the programme in the best possible manner, could any other day have been so propitious for treason to strike down its first victims, as the anniversary of the day on which was "Fired that shot — heard round the world" — at Lexington, April 19, 1775? And is it not remarkable, taht some of the descendants of the very men who then shed their blood in the beginning of the first great war for independence, should have been the first to fall in the last, and that, too, on the same immortal day? The nineteenth of April will, hereafter, unite Lexington and Baltimore on the page of American history; for each begun a long and bloody war, and Middlesex county was represented in both conflicts.

The "dramatic and patriotic effect" of the Baltimore Riots was felt throughout the North. Lithographs, broadsides, and songs recounting the incident were valuable recruiting tools. My favorite is "The New York Volunteer":

The latent treason that had been ripening its poison for forty years in the southern portion of the Republic, on the election of Abraham Lincoln to the Presidency of the United States proceeded to overt rebellion. It was confined to resolutions and words, until April 12, 1861, when it assaulted the flag of the country.

Posted by Caitlin GD Hopkins at 9:21 AM