Gravestone of the Day: Frank

FRANK
Servant to
JOHN HANCOCK ESQr.
lied interr'd here
who died 23d Jan
1771
I do not know of many African Americans who are buried in the Granary Burying Ground in Boston. The city's free black community was centered in the North End, so many of the known graves are in Copp's Hill. One of the few exceptions is Frank, a slave belonging to John Hancock, who is buried at the foot of Hancock's monument, near the Hancock family tomb on the southwest side of the graveyard. 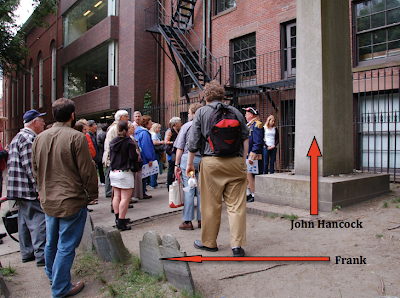 Posted by Caitlin GD Hopkins at 7:43 AM

It should be noted that that Hancock monument is a modern creation -- I don't know its date, but I don't believe it was contemporary with the man himself. Do we know what kind of marker Hancock originally had? A regular, if large, slate stone? Something else?

He is buried in the Hancock family tomb and, to my knowledge, never had an individual marker.

"In the southwestern corner of the ground a rough stone with this simple inscription,

was all that marked the resting place of John Hancock . . ."
-Historical Sketch and Matters Appertaining to the Granary Burial-Ground (1902)

Okay, in the photo I recognize Ryan, Charlie, and Michael, as well as tour leader and hat-wearer Charles Chauncey Wells. And could that be my hat brim and shoe toes at the far left?

Yep. I lost you in the cropping, but you're on the left side.