Gravestone of the Day: Mintus Brenton

In Memory of
MINTUS BREN-
TON; he departed
this Life Augst. 4th
A.D. 1774, aged
about 52 Years
Until recently, the Mintus Brenton* stone was one of the most beautiful stones in the "God's Little Acre" section of the Newport Common Burying Ground. The carver, John Stevens III, made an exquisite portrait stone with identifiably African features such as tightly-curled hair. As late as the 1970s, Ann and Dickran Tashjian featured the undamaged stone in their writings on the African-American burying ground.

I don't know what happened to the stone between 1974 and 2008, when this photograph was taken. It does not look like a typical lawnmower incident — the damage is too high and is not linear. It is possible that a tree branch may have fallen and crushed the portrait section of the stone. It is also possible that this is an example of willful, targeted vandalism against a beautiful and important American artifact.

The Farber Collection has a picture of the Mintus Brenton stone taken when it was whole: 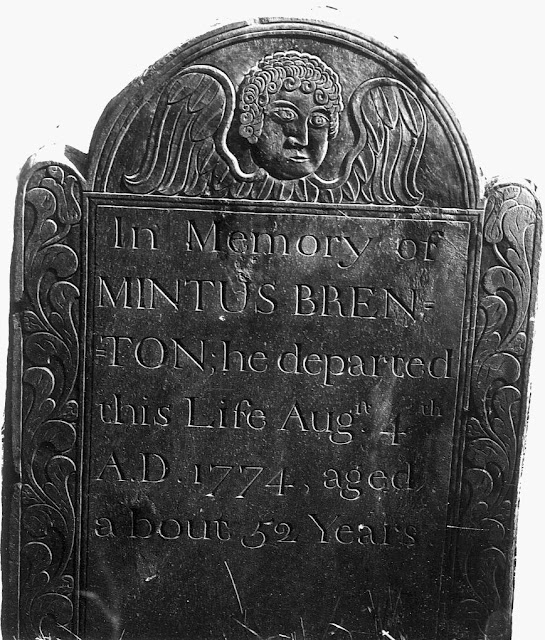 *In Bodies Politic, John Wood Sweet calls Mintus Brenton "a professional funeral director" and says that he was an active member of the Free African Union Society. Yet, Brenton died in 1774 and the Free African Union Society was not founded until 1780. It is possible that there was another Mintus Brenton, but I have not been able to find one. It is also possible that Brenton was indeed in charge of organizing funerals before the formal incorporation of the FAUS as a burial society. It makes sense that John Stevens III would have carved a particularly lovely stone for Brenton if they were acquainted (and perhaps even friendly?) through their common work in the mortuary industry.
Posted by Caitlin GD Hopkins at 7:43 AM

This one's been broken off as long as I can remember, and I've been visiting the Common Burying Ground on a regular basis with an eye toward study and discovery since I got interested in gravestone carving in the late '80s. This looks like deliberate damage; the rest of the stone isn't lying around nearby or half-buried in the turf - I suspect somebody liked the angel on the tympanum and decided to take it home.