This day, [September] 16 [1721] I set up my Connecticut stone post in Elm pasture, in Remembrance of my loving Wife Mrs. Hannah Sewall.

I don't know what a "Connecticut stone post" is, but since it seems to be a material object dedicated to the memory of the dead, I am interested in finding out.

Hannah Sewall died on October 19, 1717, and was interred in the Sewall family tomb in the Granary Burying Ground in Boston. There is no individual marker over her grave.

Before her death, Hannah had been married to Samuel Sewall for forty-one years. By all accounts, the marriage was loving and harmonious. When Hannah died, Samuel was grief-stricken:


About a quarter of an hour past four, my dear Wife expired in the Afternoon, whereby the Chamber was fill'd with a Flood of Tears. God is teaching me a new Lesson; to live a Widower's Life. Lord help me to Learn; and be a Sun and Shield to me, now so much of my Comfort and Defense are taken away.

Samuel remarried two years after Hannah's death, but his new wife, Abigail, lived for only seven months after their marriage (d. 5/26/1720). In September of 1721, he was single and lonely as he anticipated the fourth anniversary of his first wife's death. He decided to set up a memorial "in Remembrance" of Hannah, but he did not place it over her grave. Instead, he set up a stone post in his pasture.

According to this footnote (footnote 1, page 73 in the MHS version of Sewall's Diary), Samuel Sewall purchased a 5-acre patch of pasture from Thomas Dean between modern-day Beacon Street and Joy Street. If I am reading the footnote correctly, the pasture is here: 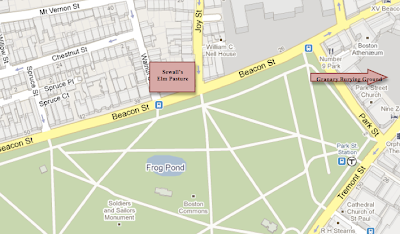 What is a Connecticut stone post? Might it have been a piece of red sandstone? Or a stone carved in the style of memorials used in Connecticut? It was apparently something distinct — another 1721 source references it as a surveying tool.

And why would Sewall commemorate his beloved wife by placing a stone in his pasture? Did it have anything carved on it? Was it visible from the road? Did the spot mean something to him and Hannah?

I can't answer these questions definitively, but it seems that this was a private ritual of remembrance, rather than a public one.
Posted by Caitlin GD Hopkins at 12:56 PM

Being in CT and not from it, I am not positive about what a CT stone post is, but from what i have seen they are simple, small, stone markers, with small engravings on them, the ones i have really looked at were used for marking miles along roads and for marking property lines...but that is so fascinating!