Recently, I've noticed several high-profile articles devoted to unusual names. David Zax has a piece entitled "What's Up With Black Names, Anyway?" featured on the front page of Salon today. Salon also ran a piece by Kate Harding on a similar subject a few weeks ago. Plenty of people are writing about Talula Does the Hula From Hawaii of New Zealand. I'm glad to know that others share my fascination with names.

People who are interested in onomastics walk a fine line between enjoying interesting names and mocking them. As many of the authors mentioned above are careful to point out, urban legends often ascribe ridiculous names to African-American or poor white children in order to reinforce racist or classist prejudices. According to Snopes,


Legend [sic] of the "kid named Eczema" ilk attempt to reinforce belief in the rightness of racism or regionalism. Just as parables were used in the Bible to communicate in a simple-to-understand form a behavior thought worthy of emulation, racist legends try to drive home the point that the looked-down-upon group is inherently inferior . . . The more stories like there are told, the more the message of them is worked into the fabric of the people exposed to them. Hearing the "kid named Eczema" story again and again makes it that much more easy to think of Blacks as less intelligent.

The urban legends generally focus on medical terms and report that an uneducated mother gave her child an inappropriate name such as "Chlamydia" or "Gonorrhea" after hearing a doctor use the term. In addition to ridiculing African-American or poor women for their supposed ignorance, these stories also imply that the mothers are promiscuous or sexually deviant by placing them in situations where their doctors would be mentioning sexually transmitted infections.

I agree with Kate Harding, David Zax, and Snopes about the purposes of these urban legends. On the other hand, I am an historian-in-training, and as such, I am loath to accept statements such as, "Was there ever a mother so stupid as to name her kid Eczema without realizing what the name meant? Probably not." "Probably not" is not good enough. In this essay, I will put some of these urban legend names to the test by running them through the census, birth, marriage, and death records at Ancestry.com and seeing what turns up.

Before I begin, a few words on my methodology:

The names tested will be drawn from the list on Snopes.

I will search for these names in several databases, including the Federal Census records (1790-1930), US military records, the Texas Birth Index (1903-1997), and the California Birth Index (1905-1995). These public records are available through Ancestry's Library Edition. This collection also includes many smaller sets of records, which I will cite appropriately when necessary.

If I can find no evidence of a particular name, I will classify it as "unconfirmed."If I find a name, I will classify it as either "confirmed" or "possible." The criteria for these categories are as follows:
N.B.:
— I can only confirm the existence of a name, not the circumstances under which that name was chosen. Thus, I cannot confirm the truth of urban legends such as those listed at Snopes.

— Public birth, marriage, and divorce records do not always identify the race or ethnicity of individuals. I have not made an effort to verify the race, ethnicity, or native language of individuals unless that information is readily available in the public records.

— These results are based on the information that I have at hand. If further research indicates that the results listed here are incorrect, I will be delighted to update my post. I'm not trying to prove that the urban legends are true — I'm just trying to find out whether the names are real and am not emotionally invested in the results. If you see the name of someone you know or you notice a mistake, please comment so I can add to or revise my conclusions.

Ok, here are the results for the Snopes list:

Eczema: Possible. Three women show up in the census records as "Eczema": Eczema Wright of Indiana, Eczema Hugey of Missouri, and Eczema James of Texas. All three of these women were born before 1900, so I doubt that anyone alive today has ever met a "kid named Eczema."

Enamel: Confirmed. Enamel Landry of Ascension, LA (b. 1869 d. 1944 — confirmed in 1910 census and in Louisiana death records), Joseph Enamel Pereten of Williamson County, TX (b. March 5, 1932). Searching for "Enamel" in the census records returns about 40 hits, some of which seem to be misspellings of "Emmanuel."

Female: Possible. This one is tricky because there is a legitimate reason for "Female" to appear on vital records in various fields and it could be misinterpreted. In addition, it is difficult to distinguish between someone named "Female" and female child who has not yet been named. This name shows up in circumstances that indicate that it may be an actual name, but there are so many opportunities for error here that I am not willing to call it confirmed. The California birth records (image above right) show three babies named Female, all of whom have middle names (either that or their middle names are really their first names and someone screwed up when they typed them into the computer). The Texas birth records also contain several Females (Female Butler, Female Hardin), though neither has a middle name, which makes me suspicious. 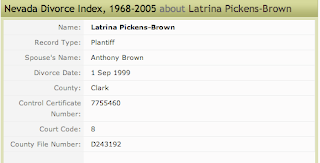 Latrine: Confirmed. Latrine seems to be a legitimate name. Examples: Latrine Sharmine Olive (b. 11/24/1979, Sacramento, CA), Quiana Latrine Phillips (b. 4/1/1988, Los Angeles, CA), Latrine Nicole Cook (b. 1/21/1976, Dallas, TX), Charlotte Latrine Martin (b. 2/8/1971, Wichita, TX). A variant form, Latrina, is actually quite popular, even cracking the top 1000 baby names in America for six years running during the 1970s. There are nearly 500 girls named Latrina in the Texas and California birth records alone. The most unfortunate example of this name has to be Latrina Pickens-Brown of Nevada (that's her married name).

Lemon Jello/Orange Jello: Unconfirmed. Perhaps this rumor got started by someone who heard the Neapolitan surname "Lemongello."

No Smoking: Confirmed. Nosmo King Cheatam (b. 11/26/1918 d. 11/10/1997). Mr. Cheatam was a veteran of the United States Navy and is buried in Texarkana, TX. He is listed on the 1920 census as "Nosmo Cheatam" (residence: Garner, Arkansas) and on the Social Security death index as "Nosmo K. Cheatam." "Nosmo" is not a unique name — see Nosmo Welch, Nosmo Corsa, Richard Nosmo Whiteheart, etc. It is possible that Nosmo Cheatam adopted the middle name "King" as an adult as a joke or that he was named after the vaudeville character Nosmo King. Either way, the Federal Government knew him as Nosmo King Cheatam. Also, Nosmo Cheatam was white.

Pajama: Possible. I found several people named "Pajama" in the public phone/address records, including Pajama Ngongba of Alexandria, VA and Pajama Howanitz of Alabaster, AL, but was not able to confirm their names independently. Since phone records are not official, I can't confirm that these are real names.

Testicles: Unconfirmed. Only one person named "Testicles" appears in the census records — a Sioux boy born in 1892 in Devil's Lake, North Dakota. The U.S. Indian Census Schedules (1885-1940) record Native Americans' names as well as the English translations of those names. The records indicate that the boy's name, Susu, means "testicles." I really enjoyed looking through these records and recommend them to anyone interested in names or in Native American history. Some of my favorite names from Susu's community include Itekanpeskawin ("Face Like an Ornament"), Hotaninmaniwin ("They Heard Her Voice"), and Tawakanhdiwayakapi ("They See Her Electricity"). These records really drew me in — after I'm done with this essay, I'm going to try to find out more about them. 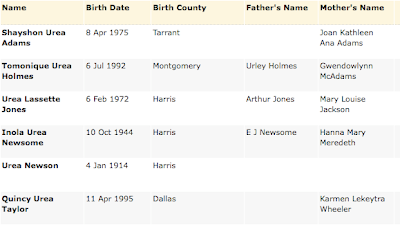 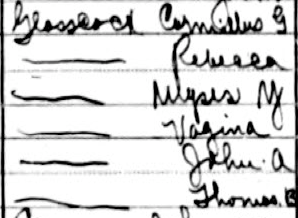 From this evidence, it is clear that some of the most outrageous of these alleged names (particularly the diseases) are entirely made up. On the other hand, nearly half of the names on the Snopes list are genuine. I need to stress that this does not mean that the legends themselves are true. I do not know what inspired Willie Meconium Cage's parents to bestow that name on him and I will not speculate. I don't know whether this information will help fellow nomatophiles, anger them, or (most likely) go ignored. In any event, I enjoyed exploring the Ancestry.com holdings and compiling this list.
Posted by Caitlin GD Hopkins at 9:09 PM

Most of those names make names like Critta(Critter?) & Tinea sound absolutely lovely. Critta was a sibling of Sally Hemmings and Tinea was a friend of my niece. And I am pretty sure I remember her saying it was spelled Tinea, which is another name for ringworm. Though according to Tinea, her mother told her it was an American Indian name, meaning. . . ? I don't remember what she said it meant, something quite lovely I'm sure because I can't imagine her mom would have purposely named her another name for ringworm.