Rounding out the top three ways to say "died" (after the very popular "died" and "departed this life"), is today's synonym: "deceased" (commonly abbreviated "Decd.").

Today, we generally use "deceased" as an adjective, but in the 17th and 18th centuries, it was also employed as a verb. The Oxford English Dictionary Online offers three definitions for the verb "decease" (all of them archaic):
The OED gives the epitaph of James Stanley (d. 1515) as an example of the second definition: "[he] decessed thys transytory wourld the xxii of March."

A few carvers favor this term. Many of the Worster family stones say "Decd.," as do those carved by Joseph Lamson of Boston. Other carvers use it only occasionally and spell it as the spirit moves them. 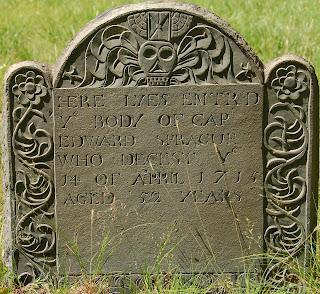 This is an interesting investigation. I'll add the following:

Of the 65 intact pre-1800 stones in the South Street Cemetery in Fitchburg there are:

Most of the stones are from the Park or Dwight workshops, I believe, but as you get toward 1800 I find them increasingly difficult to distinguish.

And this certainly does look like a Foster stone based on Forbes' illustrations, although I haven't studied them enough to distinguish the generations. The swash-left 1 is interesting and doesn't appear in any of the examples in Forbes, although it could easily be a phase or an individual oddity.

Have you ever gone into the Phipps Street Cemetery in Charlestown? That's a magical place, although the gate is generally kept locked.

Thanks for the Fitchburg data. I'm trying to figure out whether the use of "died" vs. "departed" is a question of chronology or individual carvers. I don't have a set opinion on the issue yet.

Also, I hadn't seen one that explicitly says "stillborn," so I'll have to add that to the list.

I haven't been to Charlestown yet. After my adventures in Malden, I'm a little hesitant to go back to that area. It's so much more difficult to read the 18th-century landscape in urban areas than in places like Stow or Ipswich. Usually, when I go in search of a graveyard in a rural area, I don't even bother to find directions before I go — I just find the oldest houses and follow them down the roads called "Boston Road" or "Providence Road," and that usually serves me well. Though, I guess the Phipps St. Cemetery is close enough to the Bunker Hill Monument that I won't get as hopelessly lost as I was in Malden.

Here it is right here (if the link works):

The big tree in the middle is over the (19th century) monument to John Harvard. A very large percentage of the stones are 17th century. The layout is quite unusual, and I read somewhere that people have claimed it was arranged as a map of early Charlestown (although that is probably apocryphal).

Phipps Street gets very little attention from the public because it's well off the Freedom Trail and usually locked; that has kept it in a more natural state. And I think it's big enough to give you a feel for the 17th-century Charlestown peninsula almost by itself. I climbed the fence to get in the one time I was there. (But will deny it if anyone asks ;-)