Mourning Under the Willows

In the years following George Washington's death in 1799, popular mourning art was all the rage. One trendy motif was an elaboration on the urn-and-willow design, featuring a mourner leaning on a memorial obelisk under a willow tree. Sometimes, the obelisk will have the name of the deceased or a short epitaph painted/engraved/embroidered on it. 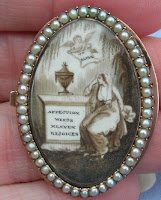 This motif can be found in British mourning jewelry from the last quarter of the 18th century. The English bracelet at right was made to memorialize Ann Read, who died on March 8, 1789. By the way, I am a big fan of the Art of Mourning website — they have lots of great jewelry and other mourning art and, what's even better, great pictures of it.

While the mourner is typically a woman (or group of women), male mourners appear on jewelry and gravestones commemorating the deaths of young women. The English mourning ring at left is a man's ring. Its inscription is dedicated to Elizabeth Legrew (d. 4 July 1791 at age 34). Similarly, the gravestone at the top of this post memorializes Sally Gardner of Harvard, MA (d. 18 February 1818 at age 21). Presumably, the man leaning on her obelisk represents her husband, Jerome Gardner. This is a beautiful stone — I love the delicate vines and the hat.

This design was rendered in all sorts of media during the early 19th century. In addition to gravestones and jewelry, it shows up in lithographs, watercolors, and needlework. One influential lithograph entitled "America Lamenting Her Loss" (at right, click to enlarge) was reproduced by the thousands, popularizing the motif across the United States. For more on popular representations of Washington following his death, see "Reading Portrait Prints: New Ways of Seeing Old Faces" by Wendy Wick Reaves over at Common-Place. 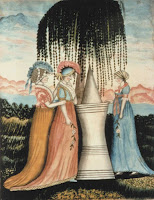 While it is not possible to draw a direct line from any particular lithograph to the watercolors of Eunice Griswold Holcombe Pinney or the needlework of young girls like Sarah Sabin, it is easy to see how so-called "folk" artists borrowed designs from commercially-produced images.

I don't mean to knock folk art, but I do mean to undermine the romanticized idea that "folk" art is produced by people who are isolated from popular culture and the market. At the American Folk Art Museum in New York, the material manifestations of 19th-century popular culture are exhibited in the same space as the works of Henry Darger and other "outsider" artists. This annoys me because the organization of the museum puts popular culture from an earlier era on the same footing as weird modern stuff, implying that both are out of the mainstream because they are unfamiliar to the modern viewer. I think that this fallacious equation gives people the wrong idea about 19th-century culture by calling to mind a naive and pastoral people who toiled away in simple honesty, close to the land, uncorrupted by the evils of modernity. Also, I object to applying the term "folk" to Henry Darger because "folk" implies a tradition maintained over a period of time by, you know, some folk, and Darger is a solitary loon.

The mourner-with-obelisk motif is an example of a design that originated with high-end European artisans (jewelers, in this case), was popularized through the commercial press, and was eventually adopted by obscure artists whose work is now regarded as "folk." I have nothing against early American "folk" art — I love the aesthetic and think that popular art opens a window into the lives of early American women.  Still, we shouldn't fetishize vernacular expressions of popular motifs. The Mary Frances Stoddard stone (1818, Providence, RI) is charming, but it is also material evidence of a far-reaching network of popular and commercial culture that stretched from elite English parlors to the humble artisans of New England.

I've always heard that the obelisk as a specific funereal image came into Europe (and America) via accounts of Napoleon's Egyptian Campaign (1798-1801), which initiated the Egyptian Revival style in art, a style that is common in cemeteries in particular. The Bunker Hill Monument and the later Washington Monument are two notable non-cemetery examples.

It would be very interesting to analyze a list of obelisks (as opposed to urns) appearing on/as gravestones before the 1790s, if any exist.

I've been looking, but I haven't found any images of obelisks on gravestones before the 1790s. The 1818 stone in this post is the earliest example I can find in my pictures.

I hadn't heard of the Napoleon connection before, but it seems to make sense. I'll keep a lookout for more evidence. I have a bad habit of skipping the post-1800 stones when I visit a graveyard and making a bee-line for anything made of slate instead.