When I was in Maine, I noticed that many of the 18th-century graveyards were dominated by stones from the big Boston carvers, particularly the Fosters of Dorchester. This makes sense due to the close ties — social, economic, and political — between coastal Maine and Massachusetts. Besides the prevalence of Dorchester-carved slate, one of the most notable things about Maine gravestones is the vast number of epitaphs that emphasize the deceased's connections with Massachusetts.

In addition, the readily-available stone in southeastern Maine is crappy for making gravestones (the stones made of local stone are typically severely deteriorated and illegible), so it makes sense that anyone with enough money would send home to Boston for slate.

The quality of the lettering on these stones indicates that the epitaphs were carved by professionals in Boston. This raises an interesting question: how did they know what to carve? Unlike local carvers who might have known the deceased or his/her family, urban carvers serving a rural market must have received orders by letter (this is probably true of any of the larger carving workshops). I don't know who wrote those letters, but it seems that somewhere along the line, there was a failure of communication.

I say this because I've seen several slate gravestones in outlying communities on which an unskilled person has altered the dead person's name. 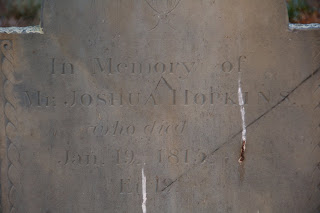 The Joshua A. Hopkins stone (1815) in Wellfleet, MA, out near the tip of Cape Cod, is a good example of this pattern. The high-quality slate and elegance of the engraving suggest that this stone was carved near Boston and shipped across Massachusetts Bay (though I should note that I'm not 100% sure — the urn is fairly simple and could have been carved by a local). That far out on the cape, there's very little native stone worth carving. When the stone arrived, someone was obviously dissatisfied because the letterer left out Hopkins' middle initial. Since the rest of the stone is run-of-the-mill (not even a verse), it's possible that a friend of the Hopkins family ordered the stone while in Boston and didn't think to include personal details. Regardless of who ordered the stone, someone in Wellfleet was disappointed and did his or her best to correct the omission. 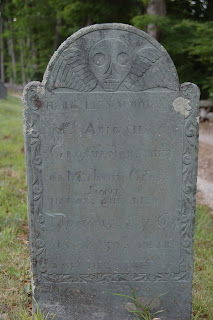 The Abigail Grosvenor stone (1763) in Pomfret, CT has a similar correction. It's a Boston-area slate stone (probably from the Foster shop) with competent lettering, though, to be honest, it looks like they let a high-level apprentice do the lettering because it's not as crisp as it should be. If the original lettering looks a little rough, the prominent addition of "JUNR" looks like it was gouged out with a sharp stone. If the text had been carved by a local, it would make sense to have the same hand make the correction. Instead, a much less skilled carver hacked out the missing designation.

Of course, a local carver could mess up name just as well as a carver who had to send his stone 100 miles. I'll put together a collection of name corrections and we'll see whether there are any differences between small-time carvers working in a local market and large operations serving distant communities.
Posted by Caitlin GD Hopkins at 10:35 PM