I'm back from Maine. It rained quite a lot, but I got to spend some time reading on the beach. 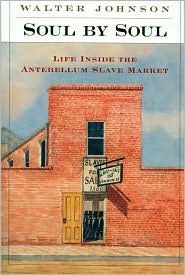 My first beach read was Walter Johnson's Soul by Soul: Life Inside the Antebellum Slave Market (1999). You might justifiably wonder whether I got any strange looks, but I was sitting next to my mom, who brought along a 3" binder full of photocopies of 19th-century letters so that she could do a little transcribing. At least mine was a paperback.

I've been trying to think of a satisfying way to describe Soul by Soul, but after 3 days of reflection, it still eludes me. I guess the best way to say it is that this is a tremendously useful book, but it's not a very good read.

Rather than a history of slave markets in general or of a particular historical moment, Johnson has written a book about how slaves, buyers, and sellers experienced the market, both empirically and imaginatively. It's not really a book about what happened so much as a book about how things happened.

I tend to like a little narrative with my history, so Johnson's style didn't appeal to me. Instead of telling stories and interpreting the actions and ideologies of the participants, Johnson writes in an endless series of introductory paragraphs: lots of sweeping statements backed up by brief sketches and quotations that sometimes seem dropped out of the sky. I think that his argument would have been more accessible if he had kicked off each chapter with a short, narrative example so that the reader could grab hold of some grounding specifics.

I don't mean to imply that Johnson's sources are insufficient support for his argument. In fact, I think he does a brilliant job interpreting his sources, especially when he is illuminating how slaveholders thought about themselves and performed their identities. But I do think that he could have done a better job of explaining his sources (slave narratives, Louisiana court records, and slaveowners' letters). I didn't really get a good sense for the bodies of evidence because Johnson presented such abbreviated excerpts from individual court cases and letters without really setting the stage. I'm not quite as paranoid as some of the Amazon reviewers, but I did think that his style was less persuasive than it could have been because so many of the quoted sources were presented without a lot of context.

The very qualities that make Soul by Soul an unsatisfying read make it delightfully useful. The writing is not overburdened with specific details of individual transactions, so there's no need to search around for the plainly-stated conclusions. Since Johnson does not shy away from sweeping statements of his arguments, he is unfailingly quotable.

Here's a rundown of the major points (this is mostly so I remember them for generals):

Chapter 1: The Chattel Principle:
Even when they were not in a physical slave market, enslaved people's lives were lived in the shadow of their monetary value. Although slaveowners tried to draw an imaginary boundary between the market and the everyday course of slavery, slaves lived in "perpetual dread" of being separated from their families, communities, and familiar work regimes on their master's whim. Slaves resisted being sold in various ways (running away, threatening to commit suicide, appealing to slaveholders' sense of obligation as patriarchs) and masters engaged in elaborate subterfuges in order to avoid resistance.
Key quote:
"At the heart of the slave market, then, there was a contradiction and a contest. The contradiction was this: the abstract value that under-wrote the southern economy could only be made material in human shape — frail, sentient, and resistant. And thus the contradiction was daily played out in a contest over meaning. Were slave sales, as so many slaveholders insisted, the unfortunate result of untimely deaths, unavoidable debts, unforseeable circumstances, and understandable punishments, or were they, as so many slaves felt, the natural, inevitable, and predictable result of a system that treated people as property?" (29)

Chapter 2: Between the Prices:
Although the chattel principle imagined enslaved people in terms of their potential prices, the reality of slaves' humanity was unavoidable. Slave traders used their assumptions about slaves' humanity to maximize their profits and minimize their risks. For example, a trader might hold out the promise of kindness toward a child in order to keep a parent from resisting or might rape a slave in order to humiliate and subdue her. At the same time, slaves formed new communities in the markets, allowing them to pass on information that could lead to various types of resistance.
Key quotes:
"The slave traders did not ignore or abolish the humanity of the people they categorized and compared and bought and sold. They used it. To protect themselves and their investment, the traders had to imagine the world from their slaves' perspective: to see geography and time and human connections and desire as their slaves did and to insinuate their surveillance and insert their discipline in every detail of the slaves' existence" (63).
"There was nothing automatic about the formation of a community of slaves in the trade — the slave coffles and pens, indeed, were shot through with animosity and suspicion; yet out of these contingent interactions could be fashioned connections that could sustain slaves emotionally and help them circulate important knowledge about the trade" (76).

Chapter 3: Making a World Out of Slaves:
White slaveowners fashioned their own identities out of their relationships with slaves and other slaveowners. For example, a slaveowner who wished to see himself as a benevolent patriarch might think of buying a slave as "rescuing" that person from the evils of the market. White men entered into full membership in Southern society by becoming slaveowners and set themselves up as good providers by buying people who could care for their children, free their wives from manual labor, and provide financial security for their families.
Key quotes:
"Built out of people who could be bought in the market, slaveholding households were advertisements for their masters, for their gentility and distinction, for the delicacy of their women, the tone of their lives, and the quality of their service" (101).
"They bought slaves to make themselves frugal, independent, socially acceptable, or even fully white; they acted in accordance with the necessities of their their business or the exigencies of their households; they covered the contingency of their own identities in the capacious promises of paternalism, buying on behalf of the bought; they obscured the dependency of their fantasies with the brutality of their mastery" (116).


Chapter 4: Turning People into Products:
In order to maximize their profits, slave traders had to appeal to buyers' fantasies. Accordingly, they invented new histories for the people they sold, often obscuring or misrepresenting illness, disability, and skills. Traders also devised categories for slaves based on age, sex, health, and skill set and dressed slaves alike so that they became interchangeable representatives of their categories onto whom buyers could project their expectations.
Key quote:
"The traders' daily business was to shape the real people they had in their hands to reflect the abstract market they had in their heads, and then to punctuate their categories of comparison with the value-producing practice of differentiation: the special clothes and spatial arrangement, the articulated human connections, the singular story" (133).

Chapter 5: Reading Bodies and Marking Race:
In the market, buyers tried to discover slaves' histories and potential by examining their bodies. In addition to assessing physical strength, buyers used physical characteristics such as skin color as manifestations of a slave's abilities (ex: dark skin = health, hardiness, resistance to disease; light skin = "delicacy," capacity for skilled work).  Slaveowners' ability to "read" slaves' bodies reflected on their own competency — men who could interpret bodies gained reputations for their skill, while men who bought dying slaves might be ridiculed for their gullibility.
Key quote:
"The rituals of the slave pens taught the inexperienced how to read black bodies for their suitability for slavery, how to imagine blackness into meaning, how to see solutions to their own problems in the bodies of the slaves they saw in the market. Gazing, touching, stripping, and analyzing aloud, the buyers read slaves' bodies as if they were coded versions of their own imagined needs — age was longevity, dark skin immunity, a stout trunk stamina, firm muscles production, firm breasts fecundity, clear skin good character" (149).

Chapter 6: Acts of Sale:
In the end, buyers/slaveowners were dependent on the people they enslaved for information and performance that lived up to the masters' expectations. In the market, slaves could manipulate their words and actions to encourage an advantageous sale, avoid an unfavorable one, or persuade a master to return the slave and void the sale (legal in LA up to one year after purchase).
Key quotes:
"Slaves were the information brokers in the slave market" (176).
"But is buying on trial allowed slaveholders an opportunity to extend the slave market in time and space, it also gave slaves an opportunity to examine their buyers and choose whether to match or subvert their evident expectations" (182).

Chapter 7: Life in the Shadow of the Slave Market:
Once buyers brought slaves home from the market, they were perpetually disappointed because the "frailty or resistance" of the enslaved people themselves could never live up to the slaveowners' fantasies. Since slaveholders imagined that their slaves would respond in predictable ways to their beatings or entreaties, any discrepancy between expectations and performance was taken as evidence of the slaves' stupidity, laziness, or bad character. As much as slaves were dependent on the will of their owners, masters were dependent on the daily decisions of their slaves.
Key quote:
"Life in the shadow of the slave market was framed by the tension between the fantasies the slaveholders purchased in the market and the real people they brought home from the pens" (189).
"The piteous image of a twelve-year-old child beaten because he could not stop his nose from running onto the dinner napkins was not, as some scholars would have it, a violation of the utuality of master and slave. It was, instead, the essence of that grim mutuality: the natural result of slaveholders' inevitable failure to live through the stolen bodies of their slaves" (206).

I know that this is a ridiculously long summary/review. Nevertheless, Johnson earns the VPI Grad Student Seal of Approval for making his case in a mere 220 pages.
Posted by Caitlin GD Hopkins at 4:53 PM