Following up on a comment in this thread, I wanted to post some more evidence of accents showing up on gravestones.

In addition to the depated stones, I've seen a few stones that add an extra "r" sound onto the end of a word or name. The best example is the Annar Lawrence stone (1776) in Rumford, RI.

When I was looking over my pictures for name corrections, I found another possible example. There's a little blue slate stone in Pomfret, CT carved by the Soule workshop and dedicated to little Pearley Grosvenor, age 4 (d. 1791).* Pearley, we are told, was the son of Capt. Thomas Grosvenor and his wife, "Alletherr." It seems to me that Pearley's mother was probably named "Althea" and that one of the Soules just did his best to spell it the way it sounded.

I think this is likely because there ia at least one woman named "Althea Grosvenor" listed in 19th century census records for Pomfret (possibly a granddaughter). 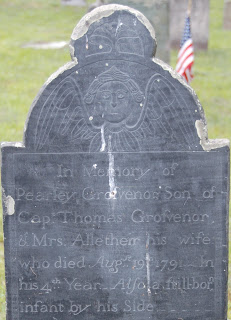 What do you think? Is "Alletherr" really "Althea" with a New England accent?

*An aside — there is a tiny town in northeastern Connecticut called North Gosvenorsdale. People on the internet will tell you it's pronounced "GROVE-ner-dale," but I've never heard anyone call it anything but the much less dignified "North Grunnerdell." It's not as bad a name as Penn Yan, NY, but it looks terrible in print.

UPDATE: I found a marriage entry for Thomas and Allethea Grosvenor in the Pomfret section of the Barbour Collection's pre-1870 vital records on Ancestry.com. They were married on June 3, 1784.

Apparently, her last name was Grosvenor both before and after her marriage. Allethea was the daughter of Caleb Grosvenor, a tavernkeeper.
Posted by Caitlin GD Hopkins at 9:37 AM

This one reminds me of a story Bernard Bailyn told about working in some 18th-century German archives and finding a record of someone who was emigrating to Binzel Vanier. He was puzzled until he realized it was pronounced BinzelVAINia.

In the South Street Cemetery in Fitchburg there is a double stone for Capt. Rueben Gibson and Louis his wife. Probably not an early example of gay marriage, so whether it represents Lois or Louise I'm not sure.