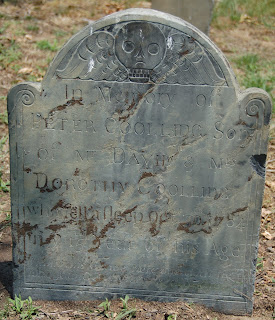 "Fell Asleep" is a very gentle euphemism for "died." Initially, I was mildly surprised to see such a placid sentiment on an eighteenth-century stone — I would not have looked for it before the 19th century. Then, I decided that it wasn't so strange — "fell asleep" implies that the deceased will awake at the Second Coming. Perhaps that is what Peter Coollidg's family hoped for him. On the other hand, the other language in the epitaph — "In Memory of" and the verse — do not seem to indicate a strong belief in literal resurrection:


In Memory of
PETER COOLLIDGE Son
of Mr. DAVID & Mrs.
DOROTHY COOLLIDG
who fell asleep Oct. 30th 1784
in ye 15th Year of his Age.
Within this Grave here one doth lie
who saw God's glory & did die.