101 Ways, Part 12: Went Rejoycing Out of this World into the Other 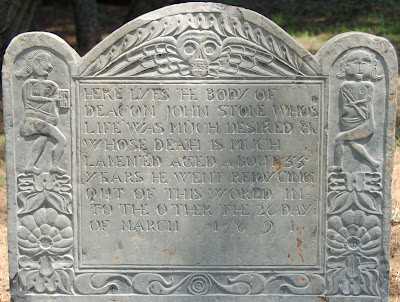 John Stone's gravemarker in Watertown, MA is stunning. It is similar to the famous William Dickson stone in Cambridge's Harvard Square Burying Ground, though it lacks that stone's coffin-carrying imps. His epitaph is a testament to the place he held in the hearts of his neighbors:

HERE LYES THE BODY OF
DEACON JOHN STONE WHOSE
LIFE WAS MUCH DESIRED &
WHOSE DEATH IS MUCH
LAMENTED AGED ABOUT 55
YEARS HE WENT REJOYCING
OUT OF THIS WORLD IN-
TO THE OTHER THE 26 DAY
OF MARCH 1691
I abosolutely love that line, "rejoycing out of this world." It makes me think of Miriam and tambourines and that scene in The Prince of Egypt when all the children of Israel start singing, "ashira l'adonai." If you don't know the scene, skip to the 2:30 mark in this video:

Most Puritan epitaphs are restrained at best and grim at worst. Even when they offer some comfort, the 17th-century gravestones seldom strain beyond the cool assurance of "ye memory of ye just is blessed." I know next to nothing about John Stone, but I wonder whether he ascribed to the orthodox, Calvinist-inspired Puritan god — just, mighty, stern, and imposing — or to a more gentle and loving idea of the deity.
Posted by Caitlin GD Hopkins at 5:18 PM

This series would make such a wonderful article for a magazine. I hope you'll work it up into one when you're finished with all 101.

Thanks! I've got about 20 posts lined up in the queue, but I have yet to do much visiting in Rhode Island, New Hampshire, or Vermont, and hope their graveyards will yield some good epitaphs.

What are the funny figures doing?

The death imps are holding symbols of mortality: darts, an hourglass, and a scythe. I don't know why their arms are crossed.