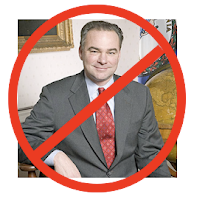 As I told the very nice, but befuddled, woman from the Obama campaign on the phone today, if Obama picks Tim Kaine, they can stop calling me for money.

I've given before and I'm planning on giving again, but if Kaine is the VP pick, those future donations go directly into the liquor cabinet fund so I can make it through the years when an anti-choice, anti-gay Democrat is the party's #2 (or, FSM forbid, #1).

I was never a Clinton supporter (I was for Edwards before he dropped out). Still, I think it would be incredibly tone-deaf for Obama to pick a VP who would be seen as a slap in the face to female democrats and to men who care enough about pro-choice issues to understand that they're not peripheral to a progressive agenda.

I've got a nice, fat donation sitting right here, waiting for Obama to announce anyone other than Tim Kaine.

I don't think you have too much to worry about, Caitlin. It sounds like Biden is going to be the VP...at least that is what the "experts" on T.V. and radio keep telling me! =)

Here's hoping.
Not that Biden makes me jump up and cheer or anything.
We'll know soon enough.

Wondering if now you are sorry you made the donation since Obama made Kaine head of the DNC?

If Tim Kaine were the apogee of my disappointment, I would be tickled.

Then again, I am endlessly thankful that I have the opportunity to be disappointed in Obama rather than live in fear of a McCain-appointed Supreme Court.