While reading They Fought Like Demons: Women Soldiers in the American Civil War, I came across the story of Melverina Elverina Peppercorn.

According to Elizabeth Avery Meriwether, Melverina was strapping, six-foot farm woman with a man's strength. When the war came to Tennessee, Melverina and her twin brother, Alexander the Great, joined the fight. Alexander the Great (a.k.a. "Lexy") was wounded in battle and his sister left the army in order to care for him.

I would like to take this opportunity to bestow an award of onomastic merit on the parents of Melverina Elverina and Alexander the Great Peppercorn.

Unfortunately, I cannot find the Peppercorns in the census, even after trying variations such as Pfefferkorn. This is not entirely surprising since they were supposedly from a remote area of the mountains in Tennessee. The state of Confederate records also makes verifying their service tricky. Since I can't verify the Peppercorns' existence with an independent source, I can't say for sure that their names are real.

Still, in my search of the census records, I did find several other people named "Alexander the Great," including,
There are also dozens of people named Julius Caesar, Charlemagne, and William Shakespeare. I suppose I can understand why parents might choose famous names for their children, but I do wonder about the parents of Judas Isacariot Upton (b. 4 Jan. 1951, San Diego, CA). Perhaps they had a brainstorming session with the parents of Pontius Pilate Crews (b. 1876, Tally Ho, NC), Lucifer Seraphini (b. 1916, Lackawanna, PA), and Genghis Khan Hatch (b. 26 April 1984, Dallas, TX).

Then there's Adolf Hitler Hargrove, who was born in Smith Creek, North Carolina in 1940 and died 5 months later, thus avoiding unprecedented levels of bullying. I don't wish to make light of a baby's death or his family's grief — I only mean to say that life in the Jim Crow South was hard enough for a black man without going through life named "Adolf Hitler." 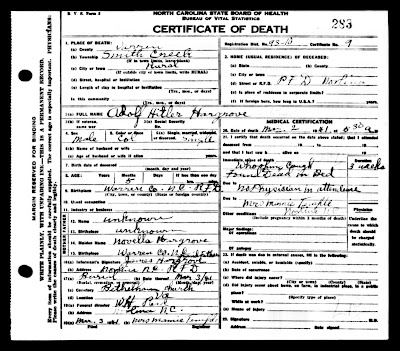