Is Freedom of Religion a Shield? 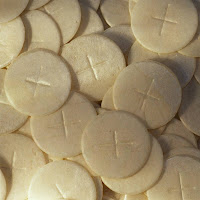 In recent weeks, there has been an uproar over blogger P.Z. Myers' desecration of a consecrated eucharistic wafer. A little background: A college student in Florida received death threats from angry Catholics after he smuggled a consecrated wafer out of a Catholic church. P.Z. Myers, an outspoken atheist, was outraged by the vitriol cast at the student and pledged to desecrate a post-transubstantiation host in order to affirm his belief that "nothing must be held sacred." Bill Donohue and the Catholic League got in on the action and Myers has received several death threats of his own, along with thousands of angry emails from offended Catholics.

In response to this incident, the Confraternity of Catholic Clergy issued a press release that caught my eye because of its pronouncements on the meaning of religious freedom and the intentions of the founding fathers. The statement reads, in part,


We find the actions of University of Minnesota (Morris) Professor Paul Myers reprehensible, inexcusable, and unconstitutional. His flagrant display of irreverence by profaning a consecrated Host from a Catholic church goes beyond the limit of academic freedom and free speech.
The same Bill of Rights which protect freedom of speech also protect freedom of religion. The Founding Fathers did not envision a freedom FROM religion, rather a freedom OF religion. In other words, our nation's constitution protects the rights of ALL religions, not one and not just a few. Attacking the most sacred elements of a religion is not free speech anymore than would be perjury in a court or libel in a newspaper . . . The freedom of religion means that no one has the right to attack, malign or grossly offend a faith tradition they personally do not have membership or ascribe allegiance.

I haven't been able to find much information on this organization. According to their website, the CCC is an "Association of 600 Roman Catholic Priests and Deacons pledged to the pursuit of personal holiness, loyalty to the Roman Pontiff, commitment to theological study and strict adherence to the authentic teachings of the Magisterium." Since they lack either the resources or the web-savvy to hire a web designer, I have to assume that it's not a very powerful organization. Still, I think that their understanding of religious freedom is worthy of comment.

First, I think that it’s important to dispel the idea that the actions of any private citizen can be unconstitutional (unless that citizen is acting as an agent of the government). Private citizens can violate laws, but the Constitution only applies to governmental actions. As Professor Laurence Tribe once pointed out, there are only two ways a private citizen can violate the Constitution: by enslaving someone or by transporting alcohol across state lines in violation of section 2 of the 21st Amendment. Even though Myers works at a public university, the desecration took place at his private residence and he discussed it on his personal blog (not hosted by the university), so it’s difficult to argue that he has the standing to act unconstitutionally.

I’m not writing to defend Myers’ actions, but to examine the CCC’s take on freedom of religion. Their position includes three main elements, one of which is probably true, while the others are, I think, way off the mark.

The first (true) part of their argument is that the Founding Fathers did not envision a society that functioned without religion. As various contributors to this blog have shown, the leading political figures of the late 18th century believed that religion was the backbone of private and public morality (though by “religion,” they did not necessarily mean orthodox Christianity). I disagree with the Founders on this issue, but I don’t deny that they thought that way.

The second part (“Attacking the most sacred elements of a religion is not free speech”) is worth fleshing out. I don’t think there’s anything in our founding documents that prevents me from going out and buying a Bible and starting a bonfire with it. It may be crass, but it isn’t illegal (as long as I don't start a forest fire). There may be something here about hate crimes, but since hate crimes are all about intention, I don’t think Myers' acts would meet hate crime criteria since they were meant to demonstrate the folly of sacred objects, rather than to convey hatred of a particular group. Not 100% sure on this — anyone with legal expertise please feel free to prove me wrong. And just for the record, I don’t support burning books for any reason.

Of course, you can’t burn a church or destroy a sacred object that belongs to someone else (arson and theft are crimes, after all), and they may be arguing here that the consecrated host was stolen. Can you be said to steal something if it is freely given to you? Is the implied contract between a communicant and a celebrant legally enforceable? If anyone knows case law on this, I’d be interested in seeing it — the only relevant examples I can find involve stealing large numbers of free things (like campus newspapers) in order to keep them from being distributed. The distinction here is that there is a difference between criticizing a religion’s beliefs and attempting to intimidate its membership by vandalizing their buildings/libraries/relics, etc. I think Myers’ actions (destroying an object with negligible monetary value in the privacy of his own home and then writing about his reasons for doing so) are closer to the former than the latter, but the CCC obviously disagrees.

The last pillar of the CCC’s argument is the strangest. It deserves to be quoted again:


The freedom of religion means that no one has the right to attack, malign or grossly offend a faith tradition they personally do not have membership or ascribe allegiance.

By placing this statement immediately after their speculations on the Founding Fathers’ intentions, the CCC implies that the Founding Fathers understood the 1st Amendment to be a Constitutional shield protecting religious orthodoxies from the uncouth rabble who might “malign” them.

I have a mental image of John Adams doing a spit-take.

Adams certainly did his share of maligning. Speaking of his own forebears, Adams spoke approvingly of how they “derid[ed], as all reasonable and impartial men must do, the ridiculous fancies of sanctified effluvia from Episcopal fingers.” He also believed that the Mass and its trappings were intended to “bewitch the simple and ignorant.”

Come on, John, tell us how you really feel:


In the Countries of slavery, and Romish superstition, the Laity must not learn to read, least they should detect the gross Impostures of the Priesthood, and shake off the Yoke of Bondage. But in Protestant Countries and especially in England and its Colonies, Freedom of Enquiry is allowed to be not only [illegible] the Priviledge but the Duty of every Individual. We know it to be our Duty, to read, examine and judge for ourselves, even of ourselves what is right. No Priest nor Pope has any Right to say what I shall believe, and I will not believe one Word they say, if I think it is not founded in Reason and in Revelation. Now how can I judge what My Bible justifies unless I can read my Bible.

I don’t know whether the CCC would be “grossly offend[ed]” by those remarks, but Adams certainly meant them to be offensive.

Adams was not alone in saying mean things about the Catholic church. In 1774, the Continental Congress called Catholicism, “a Religion that has deluged [Britain] in blood and dispersed Impiety, Bigotry, Persecution, Murder and Rebellion through every part of the World.” John Jay supported an article of the New York Constitution that prevented people from becoming citizens unless they would “abjure and renounce all allegiance and subjection to all and every foreign king, prince, potentate, and State in all matters, ecclesiastical as well as civil.”

Our founding documents may enshrine a right to worship without fearing government persecution, but our Founding Fathers did not surrender their right to criticize "faith traditions." I doubt that Americans who grew up reading about the Marian martyrs would endorse any legal barriers preventing people from criticizing the doctrine of transubstantiation.

I am envisioning a comments thread that runs off the rails picking apart Prof. Myers’ actions rather than the CCC’s position on the freedom of religion. I’ll save you lots of time by linking to several threads that have beaten that subject to death.

Instead, what do you think: Did the Founding Fathers believe that the first amendment should function as a cocoon to insulate “faith traditions” from non-members who wish to “attack, malign or grossly offend” them?
Posted by Caitlin GD Hopkins at 2:11 PM