"Children Writhing on the Pike and Halberd"

Love it. The best part is, it's almost a verbatim quote from a pro-Adams essay. I say "almost" because the video leaves out "adultery." In October of 1800, several New England newspapers (including the Portland Gazette) printed an essay predicting that a Jefferson victory in the upcoming election would lead to a civil war between upstanding Federalists and "Jacobins . . . destitute of morality and religion." Such a war would result in unimaginable horrors: 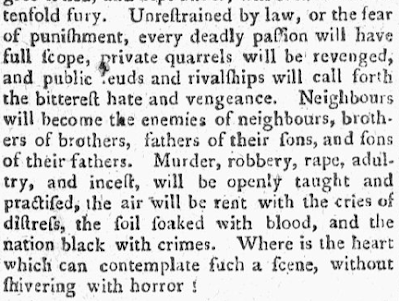 Of course, Jefferson supporters gave as good as they got. Every fife and drum corps in the country knows "Jefferson and Liberty," which has great lyrics:


The gloomy night before us flies,
The reign of terror now is o'er;
Its gags, inquisitors, and spies,
Its herds of harpies are no more!

Chorus:
Rejoice! Columbia's sons, rejoice!
To tyrants never bend the knee;
But join with heart and soul and voice,
For Jefferson and Liberty.

No lordling here, with gorging jaws,
Shall wring from industry the food;
Nor fiery bigot's holy laws
Lay waste our fields and streets in blood.

(etc. for another twelve verses)