Early Americans who wanted to class up their epitaphs a bit could choose the Latin "obit" (abbreviated "obt."). Dropped into an otherwise unremarkable epitaph, "obit" conveys a desire to seem educated or perhaps to connect with the classical past with words as well as with images.

"Obit" comes from the Latin obire, which means "to meet," or, in this context, "to meet death." I took Latin in high school, but am no classicist, so if anyone reading this knows the difference between obire and morior, speak up and let me know.

An interesting note: More Harrington's father, Jonathan Harrington, Jr. served as a fifer with Capt. Parker's militia during the Battle of Lexington in 1775 (he was 16 or 17 at the time). He was the last surviving veteran of that battle when he died in 1854. Read Benson Lossing's 1848 interview with Harrington here. 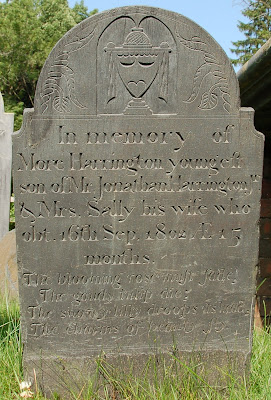 This stone is a nice example of the stylistic changes that were taking place right about 1800. It has an urn but not a willow -- generally the first phase as the heads and winged heads began to disappear. And yet the borders of the tympanum have the kind of drops and leaves that you usually see surrounding the heads and winged heads (and rarely around urns). And it still uses the long-s and the old-style numerals, which will be gone from this part of Massachusetts within 5 years I bet. If someone covered up the date, you could place this one very close to 1800 on the basis of the other stylistic elements alone.