Since J.L. Bell mentioned it in the comments (yay!), I thought I would write about Elizabeth Murray: A Woman's Pursuit of Independence in Eighteenth-Century America by Patricia Cleary (2000). This book is a great example of how a skillful historian can use a biography to illuminate an entire historical moment. Unlike, say, McCullough's John Adams, Elizabeth Murray is about how Murray's life exemplified trends in her society, not about her unique awesomeness. 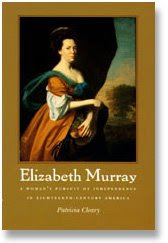 Not that Elizabeth Murray didn't lead a fascinating life. She was a teacher, a merchant, a successful businesswoman, and a world traveler (well, a British Atlantic traveler, at least).

Unfortunately, the page 123 excerpt makes her sound stuffier than she was:

As 1769 drew to a close, Elizabeth kept herself busy with London's diversions, visiting gardens, tourist attractions, and the theater. She visited Westminster Abbey and saw an exhibit of wax figures, with eyes and features that were "so lively" that her niece Betsy mistook them for real. For Elizabeth the highlight of various wax statues was that of Queen Anne.


When I was writing my undergraduate thesis, I used some of Murray's papers at the MHS. One of my favorites was a schedule for the daily routine at her school. Documents that take the time to chronicle everyday occurrences are incredibly valuable, and this one helped me provide a quick snapshot of female education in Boston during Sally Jackson's youth:

During the operation of her school for young ladies in the 1750s, Elizabeth Murray wrote down a schedule which detailed the activities of her young scholars on a typical school day. After rising at six o’clock, the girls would gather for prayers and readings from scripture before breakfast, and would walk the few blocks to the writing master’s house for “writing school” at eight, where advanced students learned “ciphering” as well as penmanship. From nine until eleven, the students would apply themselves to their needlework and take turns “reading some chosen author” aloud to the others, an activity which both entertained and informed the listeners, as well as improving the reader’s literacy and elocution. At eleven o’clock, the girls would spend an hour copying “Extracts, from books they read, according to their Tastes,” into their copybooks, after which they were free until half past one, “to amuse themselves in any way innocent, improving manners such as writing to each other, reading any Book they find in their way, making any little ornament for their heads, necks, chatting, & enjoying themselves in any part of the House/the Kitchen excepted.” After a midday meal, the pupils would return to their needlework, receive guests, read quietly, or “goe abroad” with either Ms. Murray or her assistant for the remainder of the afternoon. If a student were so inclined, and her parents were willing to pay extra, lessons in singing, dancing, French, and playing the harpsichord were also offered during the afternoon hours. Evenings were spent enjoying tea, taking walks, visiting friends, and “convers[ing] with mirth, ease, & innocence all together.” Before retiring, each girl would detail her daily accomplishments in a journal, which also contained summaries of the sermons they heard in church on Sundays. The billing schedule provided by Ms. Murray suggests that pupils generally stayed at the school for at least a year, though it was also possible to pay by the week.

While this schedule lacked the instruction in Latin, Greek, and philosophy that might characterize an elite boy’s education in colonial Boston, Elizabeth Murray’s students were provided with sound literacy skills and practical mathematics in addition to their “accomplishments.” Over the course of the day, individual pupils had more than adequate access to books, and were even allow some measure of autonomy in deciding what they would read. Although the rules stated that, “no books are allowed to be borrowed, or read but what are first known, and read by some proper judge and well recommended,” the availability of reading material suggests that the girls had a chance to read more than the Bible. Indeed, the stipulation that Saturday nights should include a reading from “some grave serious author or some portion of scripture” in preparation for Sunday implies that some of the works available to the students during the week were not sober enough for Sabbath reading. These titles may have included works of history, poetry, or pious fiction such as “Pilgrim’s Progress.”

Murray's correspondence with Amy and Elizabeth Cummings, the notorious shopkeepers who imported goods during Nonimportation, was equally valuable to me. I even became somewhat personally invested in the Cummings sisters' story; it seemed so unjust that they, among the most marginal merchants in the city, were punished for keeping their business open when they had no other means of support. There were very few jobs open to unmarried women who aspired to a middle-class standard of living, and Nonimportation made it difficult for them to carry on.

Although the Cummings sisters assured Murray that the negative press, “far from being a disadvantage to us Spirits up our friends to Purchase from us,” the Committee of Merchants did not make life easy for them. Their gender shielded Amy and Elizabeth from the worst violence in the autumn of 1769, but the anti-importation crowds did use violence to intimidate them. When a mob attacked John Mein (printer of the loathed Boston Chronicle) and George Gailer (a suspected customs informer) on October 28, 1769, they used the worst of the violence to threaten the Cummings sisters. Elizabeth wrote to Murray:

we was alarmed with a violent Skreeming Kill him Kill him, I fleu to the Windue & to my grate surprize saw Mr. Meen at the head of a larg Crowd of those who Call themselves Gentlemen, but in reality they ware no other thin Murderers for their designe was entirely on his life, sum was armed with kains Capt. Marshall stopt at Mr. Waldos & furnished himself with a spad, which he give two thrusts at Meen with upon which he fired a Pistol he had in his hand, loded only with Powder & run into the Guardhous . . . a larg Mob of [about?] a thousand Man & boys aranged themselves befor our Dorr & on a Kart a Man was Exibited as we thought in a Gore of Blood; & poor meen we was shure was the sufrer but we was happyly mistaken it was an informer [Gailer] they had caught the monin Man found shalter, & instintly posted him on a kart tard him all over the town then fathered him all under our windo thin carid him threu the town obliging him to carry the lantren in his hand & calling to all the inhabitince to put Candles in their Windoes, whan the got to Meens hence they raped loudly at which sum of the man fired a Gun from the Chamber Windo & Despirsed the Mob,

Anyone who has seen the John Adams miniseries on HBO can imagine that having someone tarred and feathered on your doorstep must have been terrifying. I don't think Zobel mentions this act of intimidation in his superb The Boston Massacre, but don't quote me on that - I'll have to check.

Also, I would like to thank Ms. Murray for having the most legible handwriting of any eighteenth-century writer.
Posted by Caitlin GD Hopkins at 10:46 PM