I love gravestones. I know lots of people do, but it was really gravestones that got me into this whole colonial America/material culture thing.

I grew up in eastern Connecticut, where colonial-era graveyards are a staple of the landscape, and I spent many hours wandering around in them. My mother participated in a project to document all of the graves of Civil War soldiers in our area, and my brothers and I would often spend weekend afternoons searching local churchyards for soldiers and men who were the right age for service. I always found the older stones particularly fascinating. Just writing this makes me want to put aside my paper prospectus, grab my camera, and head out to the nearest boneyard for a joyful afternoon. 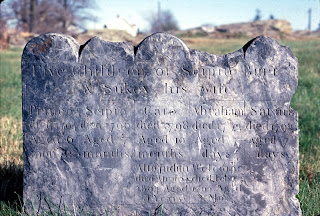 Since I cannot justify that at the moment (damn you, homework!), I'll post some photos from Rhode Island. These are from the African-American sections of Newport's Common Burying Ground (Bull), Providence's North Burial Ground (Borden), and a cemetery in Bristol, RI (Burt). 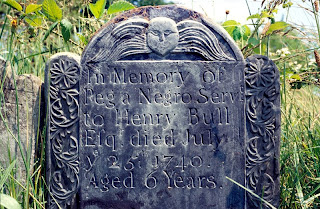 gravestones for their slaves (you'll see the same thing in Marblehead), so the Newport Burying Ground is one of the best places to see funeral art commemorating 18th-century slaves. If you get a chance to visit, the African-American section is at the bottom of the hill near the corner of Van Zandt Ave and the appropriately named Farewell St. 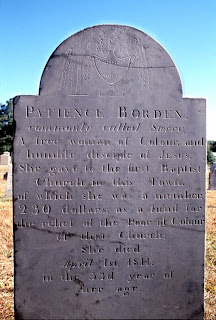 The most interesting of these three stones is Patience Borden's. One can imagine that Borden may have written the epitaph herself, making sure that her identities as a free person, a Christian, and a wealthy, benevolent woman would be remembered by the community. If you are in Providence, you can find Patience Borden's monument (along with those of a few dozen other free and enslaved African-Americans) in the North Burial Ground about 100 ft to the west of the Stephen Hopkins monument.

Photo credits to Robert Emlen, who taught me the value of a well-composed slide.
Posted by Caitlin GD Hopkins at 2:39 PM