Mission #1: Find gravestones with misspellings, mistakes, and revisions that are literally carved in stone.

This turned out to be fairly straightforward, as at least a third of the pre-1800 stones had at least one identifiable error. These mistakes fell into two categories: first and most entertaining were the gaffes that contemporaries had identified as errors and tried to correct, second and less fun were the spellings that do not conform to modern standard English but were not necessarily "wrong" at the time. 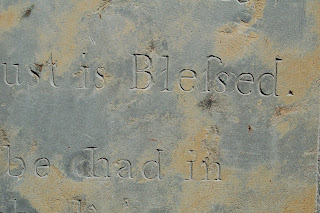 A good example of the former can be found on the Elizabeth Russell stone (1771), on which the carver struggled with the words "Blessed" and "had." "Blessed was originally spelled with a long (or medial) s and a terminal s, but there is something else scratched in lightly between the letters s and e. Perhaps someone was unsatisfied with the long s and scratched in a second, lighter, terminal s. Maybe the terminal s was supposed to be carved farther to the right, but the carver adjusted the spacing. After blowing up the image and examining it more closely, I think it is possible that the carver may have begun carving the e before remembering (or being reminded) that "Blessed" needed a second s. 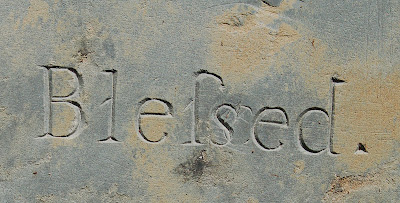 The other error on the Elizabeth Russell stone is the gouged-out letter (c? d? o?) that has been turned into an h at the beginning of the word "had." That part of the epitaph reads, "The Memory of the Just is Blessed. The Righteous shall be had in Everlasting Remembrence." The spelling of "Remembrence" probably didn't raise any eyebrows at the time (though the n is gouged out and recarved), but your guess is as good as mine for explaining the beginning of "had." 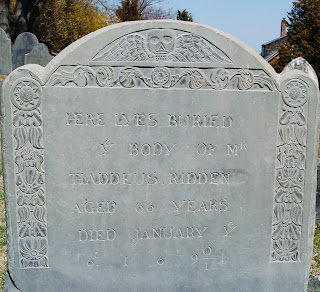 Other examples of mistakes include the Thaddeus Ridden stone (1690/1), on which the carver corrected a misspelling of the deceased's name and replaced the Gregorian date with a hybrid Julian/Gregorian date, and the Mary Brintnall stone (1688), where someone noticed that "Janury" was missing an a and stuck it in as best he could. We can tell that both of these mistakes were recognized as such in the seventeenth century because contemporaries attempted to correct them. The archaic spelling of "lyes" is not truly a mistake - it is merely one example of the many ways in which early modern English was not the same as modern standard English. In many cases, words (even names!) are spelled inconsistently within the same documents (or on the same gravestones). As long as the spelling was legible, it seemed not to matter too much whether it was consistent. 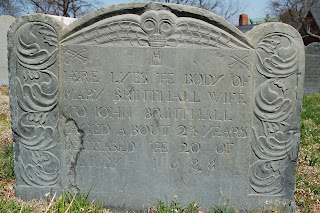 The Mary Brintnall stone is also a great example of how some carvers economized by using the vertical lines of some letters to serve as part of adjacent letters (click on the picture and observe the treatment of "here" and "the"). 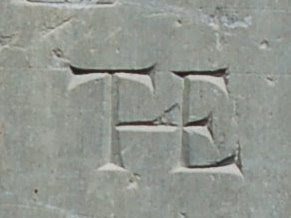 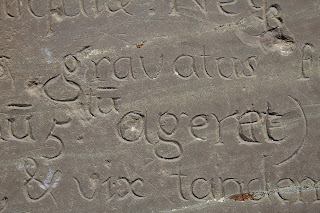 Probably my favorite mistake/misspelling example from this afternoon was the headstone for Samuel Cheever (d. 1724), the town's minister. The stone is obviously of lower quality than many of the later stones around it, but Cheever's family (or Cheever himself) seems to have wanted to commemorate his education with a Latin epitaph that was clearly beyond the stonecarver's skill. It is easy to imagine him hunched over a manuscript that made little sense to him, struggling to decipher the characters, and being forced to correct his work as he stumbled again and again. It's impossible to say whether the congregation was pleased with their minister's monument, but most of them probably couldn't read the epitaph anyway. 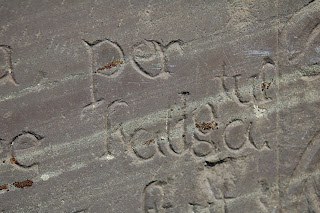 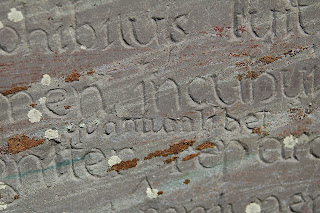