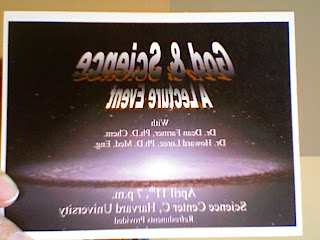 I'm sitting in the Science Center, doing my stats homework, when an undergrad comes up to me and hand me a flyer for a lecture on Friday entitled, "God and Science: A Lecture Event." Sorry for the backwards photo - holding it up for Photo Booth is the best I can do right now.

The kid who gave it to me specifically mentioned that it would be a lecture about intelligent design. The two presenters, Dean Farmer and Howard Loree, are Harvard/MIT PhDs in Chemistry and Medical Engineering.

Interestingly enough, Dean Farmer is also a minister affiliated with the Boston Church of Christ, which, according to its former members, is a well-funded, smiley cult. Howard Loree is also a leader in the church.

The ex-members at Reveal.org write this about the church's interpretation of the Bible:

Due to its insistence on "perfect unity", its rejection of interpretation and ambiguity, and its insistence that all must understand the Holy Scriptures in the same way it does, the ICC believes and teaches that only ICC members are saved. Most ICC members will, if pressed by an outsider, avoid stating this or soften it by insisting that there may be some people who came to the correct conclusions about the Bible outside of the ICC. In practice, though, the ICC believes they are the one and only true Church at present, and that it is highly unlikely, if even possible, for anyone to be saved elsewhere.

Interested in knowing what a Harvard-educated fundamentalist has to say about intelligent design? Then come on down to the Harvard Science Center, Lecture Hall C on Friday, April 11, 2008, at 7:00. Refreshments provided.
Posted by Caitlin GD Hopkins at 3:07 PM