Mission #4: Find evidence supporting or refuting the hypothesis that carvers created stockpiles of decorated blanks that were later inscribed with the name of the deceased.

Were gravestones made-to-order from start to finish? Or did stonecutters decorate stones ahead of time and add in the particulars late? I'm sure we could find a satisfactory answer somewhere in the secondary literature, but it's more fun to wander around the graveyard and look for clues.

Pete and I found several examples that seem to indicate that stones were sometimes made ahead of time. 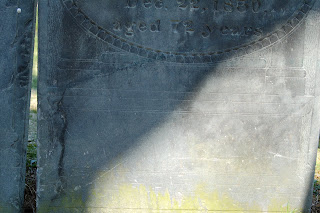 One of the most convincing was the Mary Traill stone (1850), which is highly decorated in the neoclassical style (I apologize for the crappy picture - this stone was under a tree and we didn't bring a mirror). Many similar stones nearby have a poem carved in the blank space on the plinth, but Mary Traill's epitaph is confined to the oval in the middle of the stone. The rectangle where someone might carve poem is framed nicely, but there's nothing there. This, along with the elaborate decoration and resemblance to the other stones in the family plot, seems to indicate that the stone was decorated before the specifics were added. 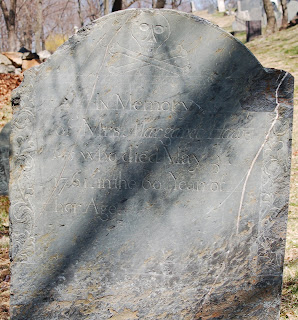 Another clue comes from the Martha Hawkins stone (1761). This is an unusual stone because the side panels are elaborately and professionally decorated, but the death's head at the top is rough, unprofessional, and lightly inscribed. This particular skull and crossbones design is found nowhere else in this graveyard, and similar icons are much more skillfully rendered. The epitaph seems to be somewhere between professional and improvised — the letters are neat and well-cut, but oddly spaced between very visible guidelines. Might this be an example of an apprentice who has mastered lettering and can be trusted to inscribe pre-decorated stones trying his hand at decorating a stone? More research would be needed to make a solid case, but it's easy to make up a story that could explain this stone. Perhaps Margaret Hawkins' son or another relative cut letters for the local stonecarver and was able to obtain a half-decorated blank for his mother/aunt/cousin. Maybe the family couldn't afford a professional stone, but the letter-cutter did his best to finish the blank. This is just a guess, of course, but it is plausible.

Some stones were obviously custom-made, but I think that we found enough evidence to suggest that others were produced with stock designs and filled in later.
Posted by Caitlin GD Hopkins at 11:12 AM