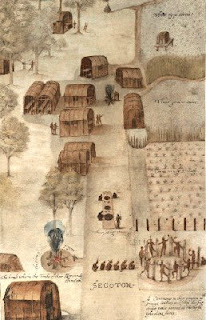 I know it's probably a bit late to mention this, but there is a workshop called "People and the Land in the Atlantic World 1500-1825" on Saturday at Lamont Library. It's free, but requires preregistration (available here).

Bernard Bailyn is giving the opening remarks. I'll admit - part of the reason I'm going is just to see him. I hear that he's around campus, but I wouldn't recognize him, so this is my chance to remedy that situation. Rumor on campus is that Bailyn has, on at least one occasion, shown up to a random senior's thesis presentation and asked intimidating questions. I would cry.

John White watercolor via. Incidentally, this watercolor is currently on display at Yale's Center for British Art. I took my mom and sister to the exhibit back in March, and it is worth a visit. The pictures are striking in person - copies in books can't reproduce the iridescence of White's fish or the erasure marks around his dancing Native Americans. The exhibit is up until June 1st. Go see it if you can!
Posted by Caitlin GD Hopkins at 11:00 PM