Religious Freedom, Polygamy, and the Limits of Tolerance

I've been following the recent raids on the FLDS compound in Texas, and tend to agree with PMomma.

Today, leaders of the church (and others) are speaking out against the raids, comparing taking the children into custody to Nazi round-ups, which is rich, coming from someone who oversaw the construction of a rape factory. That may be harsh language, but what else do you call a compound where 14-year-old girls are forced to marry 50-year old men who rape and beat them?

Also, why is the American mainstream media having such a difficult time using the word "rape" in headlines? The allegations against this group are that adult men systematically rape girls under the age of 16. Is there disagreement that this is rape? No one in their right mind can tell a teenager who has been coerced into marrying a man old enough to be her grandfather that what has happened to her is anything but real, evil, disgusting, anti-American, dehumanizing rape.

The media is also reluctant to call the FDLS members Christians.

Many religious people will claim that the faith the FLDS practiced was not true religion. But how can you tell? Every Christian is considered insufficiently Christian by at least one other Christian, so how is a poor, bewildered atheist to tell them apart? I think that we have to take people at their word on this issue; if someone professes a belief in God, Jesus, and the Bible, and self-identifies as a Christian, he or she is a Christian. Just as I have to deal with the fact that Christopher Hitchens, with whom I agree on very few points, is an atheist, Father Jonathan can't wash his hands of the FLDS by saying that they're not really Christians. This is not to say that all Christians must accept or embrace the FLDS doctrines - in fact, Christians should be denouncing the church in droves (many are). But as much as you can say, "this is awful" or "I denounce these teachings with all possible vigor" or "this church does not agree with my understanding of Christianity," it would be misleading and self-serving to say that they are not Christians.

But what really inspired me to post was something I found on a website for young adults who are questioning their faith in Scientology: Ex-Scientology Kids.com

In their FAQ section, the site administrators deal with some common questions that Scientology-questioning teens have, including:

I get sick sometimes, but I don't feel PTS, and when I am asked to locate the Suppressive Person in my life, I don't always know what to say. What's wrong with me?

The answer forcibly reminded me of 17th-century witchcraft accusations:

Well, honestly, nothing. Everyone gets sick sometimes. OT8s get sick. Wogs get sick. David Miscavige gets sick and Ron got sick. At ESK, we believe that being sick is, unfortunately, a part of being alive. Getting the sniffles does not mean that you are connected to a suppressive person. It means that your body's immune system is dealing with a virus or infection.

The same goes for having accidents. Accidents are just that - accidents. People have them accidentally. That doesn't mean that some people aren't more accident-prone that others. But there is absolutely no evidence to support the idea that sickness or accidents have anything to do with Suppressives. In the rest of the world, when you get sick, you get some chicken soup, see a doctor, and heal. And that's that.

When we were in Scientology and we got sick, we were always made to go in for a PTS handling after we were well again. We were required to find the suppressive person in our life that had made us ill. Sometimes we could think of someone right away, but most times we just named the last person who was rude to us, or just named someone at random, because we couldn't think of anyone we thought was actually suppressing us. Kinda odd, huh?

Is this for real? Teenagers are subjected to questioning by authority figures in which they are encouraged to blame their sickness/accident/crop failure on the occult malfeasance of another person? This is fascinating (and horrifying). I wonder if anyone has written academically on this practice and what it might teach us about the psychological component of accusation and confession. Of course, Prof. Hall would be very stern with me if he heard me suggesting a trans-historical, trans-religious psychology of confession rituals, but I'm pretty sure he doesn't know about this blog. I'm not trying to denigrate Scientology (mostly because it's been done). I am genuinely intrigued by this ritual of blaming natural occurrences on people.

I must investigate further. 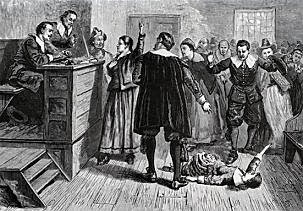 Update: Lest I be accused of picking on Christians (or Scientologists), I should make it clear that I believe firmly that everyone, regardless of religion, deserves the equal protection of the law. Any man, woman, or child who lives in the United States, its protectorates, former colonies, occupied lands, etc. should be able to call 911 and get help if he/she is being beaten, raped, or otherwise abused.* This includes members of religious minorities. While I am not totally opposed to religious groups setting up their own religious courts in which adults can agree to the adjudication of non-criminal (under state/federal law) offenses**, victims of domestic violence need access to help outside of their circle of abusers. In the United States, you are free to believe whatever you want, even if that belief is reprehensible; however, your right to believe is not a right to do whatever you want, and I fully support police intervention in any situation involving the rape of children.

*Obviously, this is not the case in America today. Women of color, immigrant women, children, and many others have limited access to protective services and have many reasons to suspect that government agencies will not actually protect them. I'm just saying that, ideally, the law and law enforcement would truly protect anyone who asked for its help.

** . . . with the obvious caveat that these courts are often responsible for perpetuating violence against women and making it more difficult for the victims of criminal abuse to get help . . .

Update: Another story of a brave little girl speaking up and getting help in order to leave her abusive marriage at the age of eight. Same age as my second-grade students. Un-frickin' believable.
Posted by Caitlin GD Hopkins at 5:58 PM