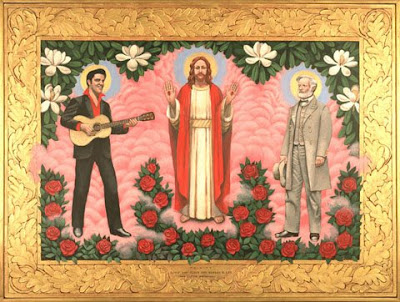 "Trinity"
by Clyde Broadway
Ogden Museum of Southern Art
I love this painting. With its allusions to Latin American religious icons, its succinct encapsulation of white Southern cultural identity, and its commentary on the relationship between history and myth, this is a striking and witty piece. At least, that's how I'm interpreting it. Is there a Poe's law corollary for neo-Confederates?

As I've been researching my paper on Confederate monuments, I keep running into Lee-as-Christ imagery. Here are a few choice words from Confederate Veteran Leigh Robinson's speech at the 1917 dedication of the Virginia monument at Gettysburg: 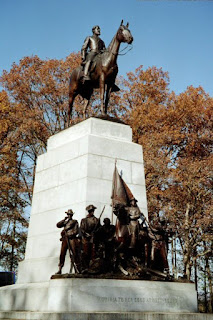 At the crisis of federal history, and of [Lee's] own, two crowns were offered to him, the crown of gold and the crow of thorns. He lifted the latter to his brow, and never was heard from him a murmur against the destiny of duty. Every gift of fortune had been showered on him, but he was greater than the gifts. Every blow of adversity was rained upon him, but he was greater than the blows.

It's not just Lee who is Christ-like — for Robinson, the whole Southern cause can be understood as a persecuted, yet gentle, savior:

It is my cherished faith that what is true of Lee is true of the cause we served, which pierced with wounds for us is sacred; and crowned with thorns for us is holy.

And, of course, for every Jesus, there is a Pontius Pilate:

Few things could be more sardonic than the crucifixion of Virginia by New England, with the approbation of Old England, for the sin of slavery.

And what of slavery, that most benevolent of institutions?

If the service of the slave had been compulsory, it was a compulsion which had liberated from degradation. The white man by his works had said to the black man at his back: "Brought to me by others as you have been, it is my part to afford the discipline, which, of yourselves, you are unable to acquire. The universe abandons you. I will protect and direct."

Yes, that's exactly how it happened.

The deeper I get into this Lost Cause stuff, the creepier it gets.