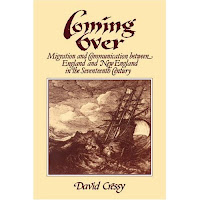 I'm working on a prospectus for an essay on female migration from Europe to the Americas in the 17th century. The central question is why there was such a disparity between the volume of male and female migration at the time. The fact of the gender imbalance is well established, but there is still considerable disagreement over the motivations that led to migration.

There are two principal types of arguments about the reasons that people moved to America: the "push" and the "pull" arguments. "Push" arguments say that migrants left there homes in order to escape intolerable conditions such as religious persecution, unemployment, famine, etc. "Pull" arguments contend that Europeans were lured to America by the promise of opportunity, social advancement, etc.

One of the books I'm examining is Coming Over: Migration and Communication between England and New England in the Seventeenth Century by David Cressy (1987). Cressy rejects the "push" argument that other historians such as Carl Bridenbaugh, Samuel Eliot Morrison, and Virginia DeJohn Anderson have embraced; that is, Puritans emigrated because they faced religious persecution in England. Instead, he emphasizes the individuality of each migrant's decision and the multiplicity of religious, economic, and personal motivations that inspired his or her to move to New England.

Although Cressy is pretty good about acknowledging the difficulty of ever pinning down exactly why any person decided to migrate, he does advance a modified pull argument. Personal tragedy or economic hardship might have given someone a nudge, but Cressy explains migration as an opportunity for advancement.

The one thing I'm not convinced by is Cressy's dismissal of involuntary migration. He discusses reluctant servants briefly, but says that Irish convicts, Scottish captives, and other coerced emigrants are an anomaly. This may be true of New England residents, where forced migration may have accounted for as little as 10% of the population, but in general, forced migration was the rule rather than the exception in the 17th century. While historians readily acknowledge that this was the case for Africans, the consensus that most British migrants were forced as well is more recent.

Next up: Lorena Walsh and Lois Carr's "The Planter’s Wife: The Experience of White Women in Seventeenth-Century Maryland."
Posted by Caitlin GD Hopkins at 3:00 PM