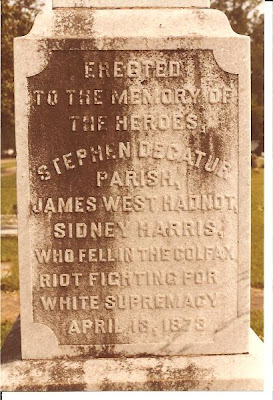 Today is the 135th anniversary of the Colfax Massacre, in which a mob of white Southern Democrats murdered at least 100 black men (exact estimates vary) in Colfax, Louisiana.

At this time, it seems appropriate to note how this event was commemorated throughout the 19th and 20th centuries. The marker at left (via), which Richard Rubin once called "the frankest monument I have ever seen," still stands in the local cemetery. Although historians generally employ the term "massacre" whe 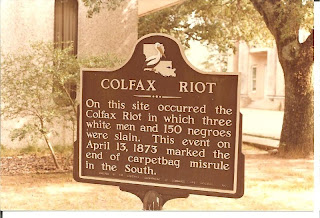 n describing this event, the state of Louisiana still refers to it as a "riot" in its official commemorative marker (see right, via), which also declares that the violence "marked the end of carpetbag misrule in the South."

For more information on this disgusting betrayal of the promises that the Federal Government made to African-Americans during Reconstruction, see Charles Lane's The Day Freedom Died or read a short version here.
Posted by Caitlin GD Hopkins at 1:40 PM

I believe that this monument should be destroyed. This represents a total disrespect to the community. Truth is not represented here by any means. The three names of the white men that lost their lives are depicted as heroes instead of what they really were. Pure Evil. The days of this lie will be over sooner than this town of Colfax knows. Healing and restoration needs to take place in this town and the time is now.

And another thing....where is the list of names of all the black men who lost their lives. Think of all the families left behind after their brutal murders which set in motion a generation and legacy of women left behind to be leaders and take care of their families by themselves. Was there no record of names kept of these(angels) that lost their lives as well.

I just tonight ran across a list of all the black (and white) people killed in this massacre...the names were incorporated into a report made by a federal army officer to Washington in the days after the event....It's online and if I can re-locate it I'll post it or at least link to it...

I strongly disagree. This monument is visible, concrete proof of the systemic racism that brought about Jim Crow laws and enabled widespread lynchings to take place. It should be removed from the site of the massacre, however, where it could only serve to insult the memory of the murdered black freedmen. It belongs in a museum that documents this type of hatred, similar to the holocaust museums.